(we haven’t had good enough wi-fi for a few days now to upload photos so we are playing catch up!)

It’s our second day in Dubrovnik, we’ve decided to get the bus again, there is a ferry from Mlini which would be a nice view, but the bus is cheaper, so we head off for the 9.40am, it’s much cooler this morning, we decide we’d like to go up the cable car to Mount Srd, it’s a small stroll to the starting point, there is a queue but it’s moving quickly, we are transported the 415 metres in 4 minutes, the view over the city walls is fantastic, it’s such a beautiful city, we can clearly see the fort and the wall, people walking along them look like little ants from our aerial position, the red roofs of the old town contrasting against the grey walls of the old city, you can see which roofs are new after being rebuilt after the 1991 shelling as they are a lighter brighter shade of red. We took in the panorama from the view-point and a photo opportunity, then we made our way to the Museum inside the Imperial Fort, this is dedicated to the Croatian homeland war of 1991 -1995. Pictures and information on the walls, it’s difficult to quite get a grasp on the politics of the war, there was a video which mainly consisted of news reel from ITN news from 1991 showing the shells raining down on the city, it was a strange situation for me watching the film because I clearly remember the news reader/reporter on the ground with Dubrovnik in the background and the ITN news. I would have been 30 years old at the time and Yugoslavia was a place I had always wanted to visit, I remember wondering if I would ever come here. 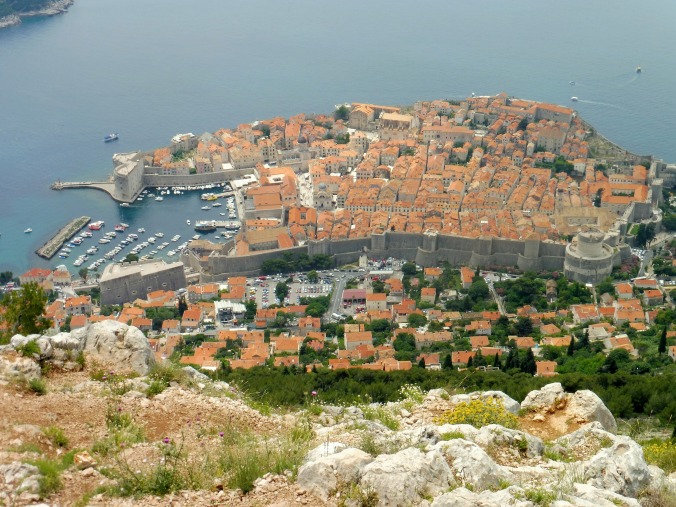 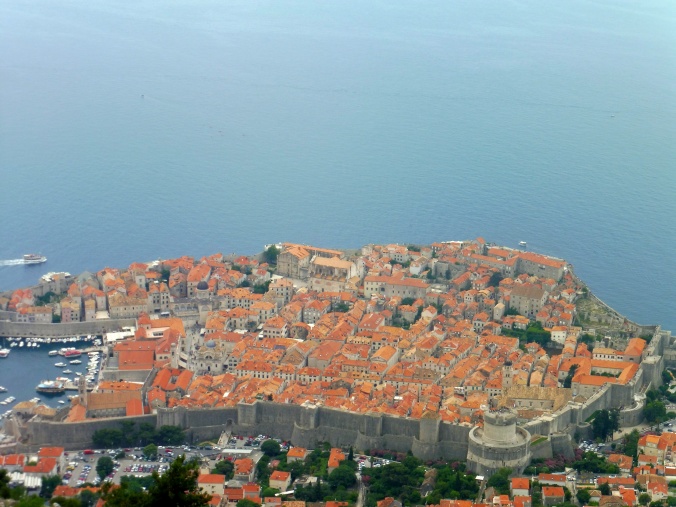 from the cable car 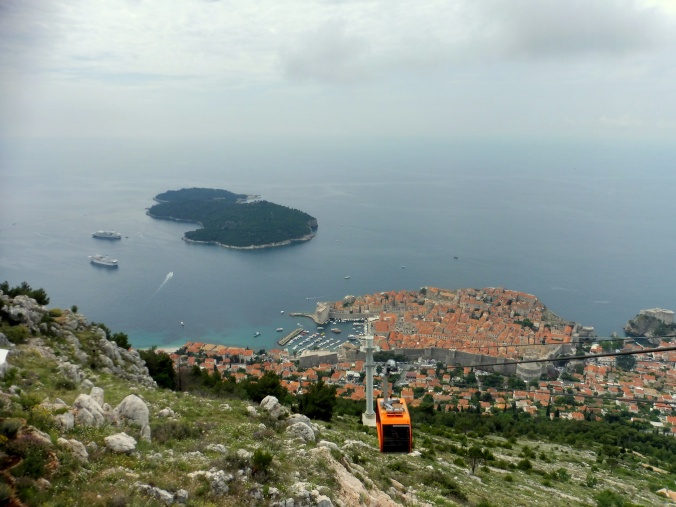 We take the cable car down and go for a short walk through Stradun within the city seeing  it with new eyes and looking closely for the evidence of the destruction that it had suffered.

We found a sports pitch high up within the city walls! 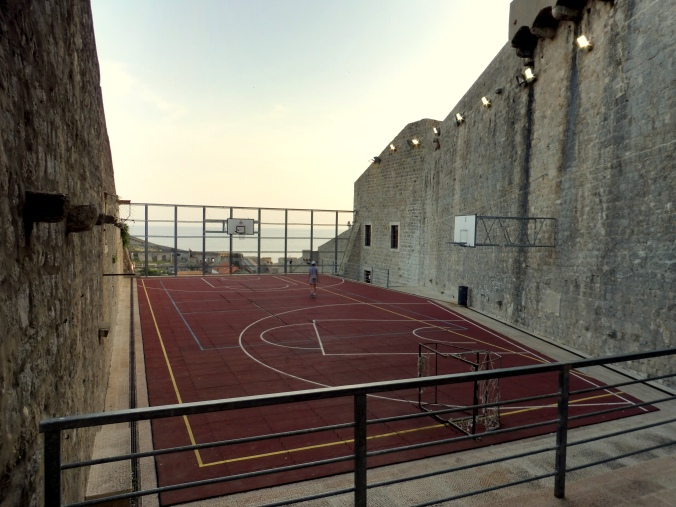 pitch of the day!

We didn’t go in to any more churches or museums this time, instead we opted to sit on Banje beach overlooking the old town and marina buying two sandwiches and some crisps from the local shop which we passed, it was then that we realised that the loud music which we could hear from up the top of Mount Srd, the local kids had finished school for good! Just like at home they had written messages all over their shirts, they were having a huge party with fireworks going off all over the place, we assumed the police presence was for their protection 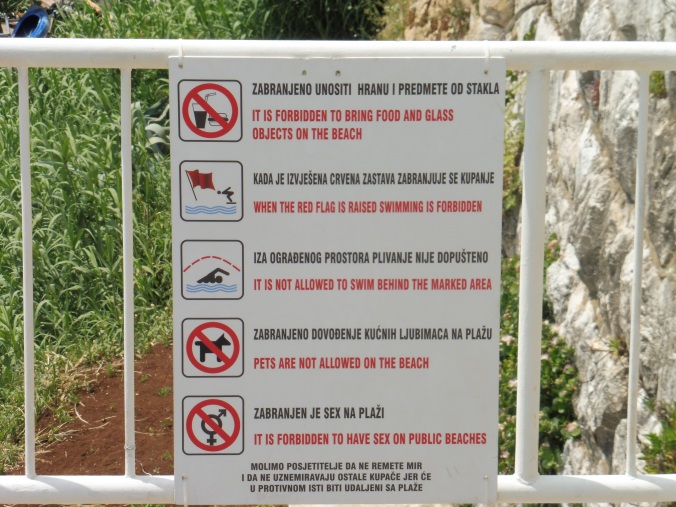 we only broke one rule!

The signs on the steps said no food to be taken on to the beach but we ignored this as its normally there because there’s a private bar on the terrace, there is no way you can stop families eating and drinking on a public beach, there were other restrictions too as you can see from the photo, we sat on some rocks and it was hot now! I needed my hat and so did Dave. 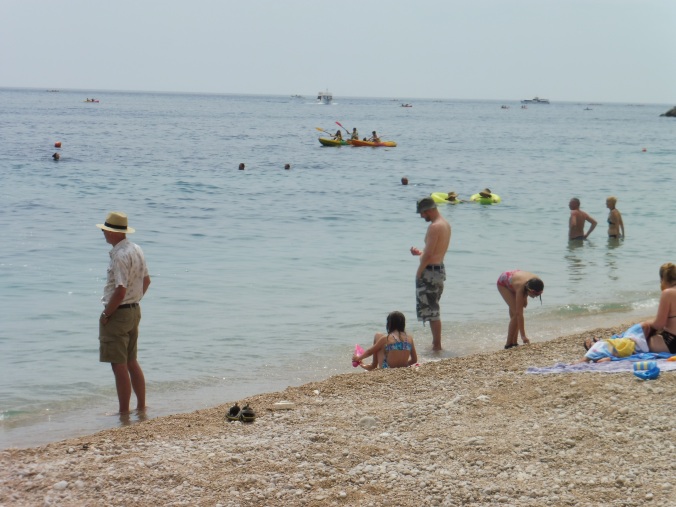 The heat was getting to us now so it’s up those steps again and back to camp, I cooked outside, Dave acting as sous chef and chopping loads of veggies, courgettes, peppers and potatoes to make a veggie curry, we don’t mind spicy food when its hot strangely. We have to be up early tomorrow as we have a 7am appointment at a garage to check the front brake squeal, so we packed away the awning canopy, chairs and tables, off to bed early, all the windows are open for some air!

It’s boiling hot today at Camping Kate in Mlini, Dubrovnik, the BBC weather says is 28° but it feels likes 31° , it’s humid and there is not much breeze, we’re keen to go into Dubrovnik but we decide to sit on camp in the shade and go END_OF_DOCUMENT_TOKEN_TO_BE_REPLACED

We will leave Prapratno Camping near Ston today but not before we take a swim on that lovely sandy beach, we made coffee and took it in some takeaway cups and with our chairs down to the beach, the water here is shallow, no stones at all just lovely soft sand and what a pleasure it was and also surprisingly warmer than other beaches have been. The rugged mountain range bearing down on the aqua bay, we left Ston without really seeing any of the history or walking the walls, we paid €14, £12.50 per night, good value we though, we said goodbye to Friedl and Charles and we hope to see them in Vienna in the future or on the road, you never know? Dave puts the coordinates in to Sat Naff for our journey to Dubrovnik, we’ve chosen Camping Kate which is 10kms at Mlini further on a bit from Dubrovnik but with a bus into the city, it’s a steady journey and the views are superb, and we didn’t think they could get any better.
The coast and the impressive grey, green rocky mountains continue to surprise us, it’s so high and steep the houses below seemingly clinging on like limpets, cars parked at such angles you wonder how they don’t roll, we crossed a modern tall bridge just before entering Dubrovnik. END_OF_DOCUMENT_TOKEN_TO_BE_REPLACED

Last night we made our way to Dubrovnik from Split where we had our rear brakes repaired, we made the decision not to go through Bosnia, the Croatian Coastal area has a brief pause at Neum. Bosnia received 12 miles of coast during the break up of former Yugoslavia. We do not have motor-home insurance for the 12 mile stretch which we would need to drive, we could buy it at some of the border checkpoints but not at Neum it seems, we’ve read stories of long queues in summer mostly and backhanders plus other stories of being waved through and no payment. We decide to go by sea and road to Dubrovnik via the Peljesac peninsular, this is accessed via a ferry from Ploče, the Peljesac peninsular is supposed to be very nice with one easy road to drive along, from here we can access Dubrovnik, thus avoiding Bosnia & Herzegovina. It was 5pm when we left the garage, so Dave says he’ll drive for a while and we’ll find somewhere to stop in an hour to 1.5 hrs. We’ve been up and down this stretch a couple of times now! (when Cathy lost her hat!)

This morning before we went to the garage I made a meal in the Mr D cookpot so tea is sorted for later. We drive long the Makarska Riviera, it’s absolutely stunning and we didn’t think it could get any better! The roads in Croatia are superb for driving, wide, smooth and nearly always in excellent condition although as we going south and Pogo is left hand drive I am always near the edge and boy! there are some very high roads in Croatia, which also makes for excellent views.

We stop at a view-point for a photo and look at the camper contact website for somewhere nearby to stay, we use the off-line version which saves our mi-fi (wi-fi) and it’s only 10kms away. We are pleasantly surprised when we arrive that the price for the pitch, motorhome and 2 people is only 124kn (€16.79 after ACSI discount). We can park anywhere apparently, but what a strange site this is, it’s massive with lots of trees, just a few people here mostly in caravans, lots of old mobile homes, a pizzeria (shut), a shop that is open, a bar (shut), a restaurant (shut), we ate our spicy veggie tea, the one I prepared earlier, Blue Peter style, give me that badge!

Afterwards we decide to explore this vast place, there were many people about all wearing the same red T shirts? Walking downhill towards the beach area we see tired worn out buildings, a very communist eastern bloc era feel to it, put it with the beautiful Croatian coast – what a mixture!

Some workmen were putting up red bunting, there was lots of laughing and joking I said they were drunk! Dave says they’re just happy! when one of them decides to pee at the edge of our pitch I know he’s drunk….. 😦

Down on the beach there is a lovely sunset and we stroll along the wooded area offset by pine trees, the smell of blossom in the evening air, more of the red T shirts, we walk past another hotel on the edge of the site with lots of loud music, sounds like a party. 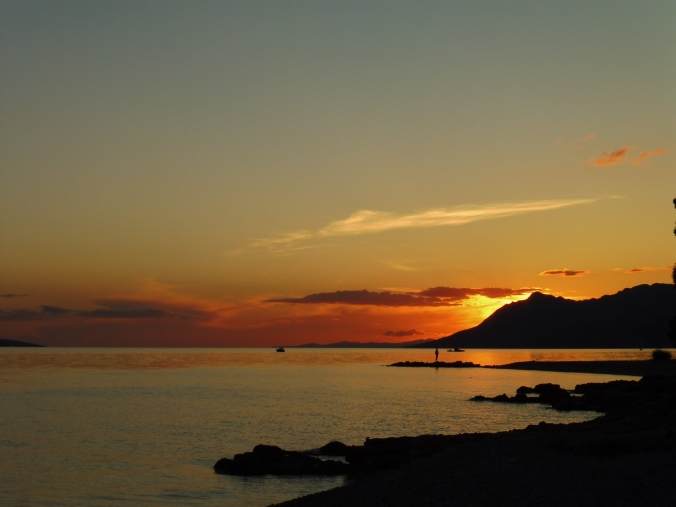 Another beautiful sunset at Basko Plojce

And lots more red T shirts, we find out later that it is a convention for a Croatian food manufacturer and what a party they were having, we sat in a little rocky cove just listening to the waves whoosh up on to the rocks, such a natural sound but with  a party beat in the background.

Back at Pogo we head to the shop, we have no water left and Dave can’t be bothered to find the fresh water point in this huge place in the dark, so it’s a giant beer in a 2 litre plastic bottle 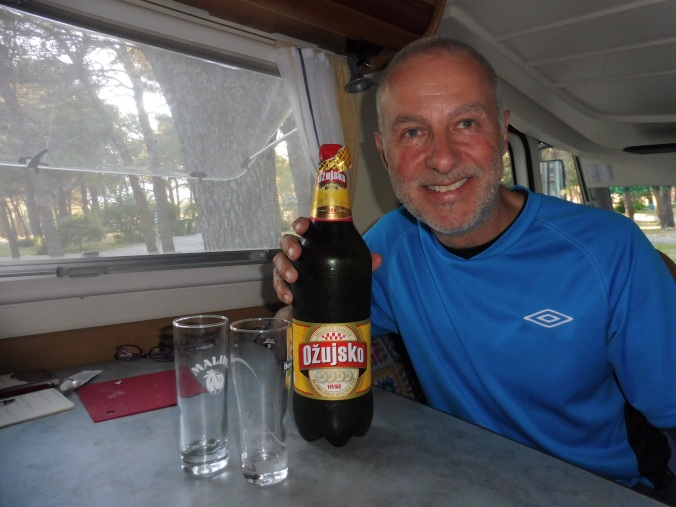 It’s the same one we have been drinking, Ozujsko, just £3.30 for 2 litres. Made use of the camp site showers in G block, it feels like a prison camp, and the worst shower I’ve had so far, most of the water ran out of the door! There were only two to choose from and someone had designated the other one as their personal shower, soap, shampoo and flannel all ready to go!

We’ve off to bed early as we tend to rise early and we’re excited to be heading en-route to Dubrovnik.

Buzz, buzz, buzz goes the alarm at 5.30am for the sunrise, we don’t mind getting up early when it’s not for work! Sorry to any working folks! it’s a little cloudy but otherwise we wait with anticipation END_OF_DOCUMENT_TOKEN_TO_BE_REPLACED