Onwards to Inch beach on the Dingle peninsular via Tralee. Again, it is blowing a very strong wind, so we park up at the car park and go in to Sammy beach bar for a pint and a meal, fish and chips and Guinness are becoming a regular pattern on this trip. Next morning we stroll a few metres onto the massive beach, END_OF_DOCUMENT_TOKEN_TO_BE_REPLACED

Is there any part of the Wild Atlantic Way that isn’t amazing? I don’t think so! Arriving at Doolin pier at tea time today we find we can park legally for 30 hours for €5, amazing, we are 5 metres from the sea, we are the 2nd motorhome and there’s loads of space, when Dave came back with his ticket he says it was €5 but it expires on Monday, well it’s only Friday now so all looks promising, we sat on the rocks END_OF_DOCUMENT_TOKEN_TO_BE_REPLACED

We are now in Co Galway after another overnight beach stop where I got caught out by the waves.

We head towards Derrigimlagh, I had read about this place as it has two very interesting historical points of interest, the first being that Guglielmo Marconi born and raised in Italy his mother was Irish and her father and uncles owned the Jameson Whiskey distillery in Dublin & Wexford, he set up a communication station in the peat bog lands at Derrigimlagh, here in 1907 END_OF_DOCUMENT_TOKEN_TO_BE_REPLACED

It was a slow late start today and after bacon butties and paracetamol we cleaned Pogo up a bit and walked along the vast Keel beach, admiring the headland towering over it, many surfers out today and lots of walkers as it’s Sunday, we’ve heard about another cove called Keem, so we drive off there, there’s a walk near to Keel to the “deserted village” but we don’t feel energetic today!

END_OF_DOCUMENT_TOKEN_TO_BE_REPLACED

When we started this trip we thought that one month was enough, the plan was to drive along the Wild Atlantic Way and also have a few inland stops too, well, we underestimated the size of the coast and so apart from a few jaunts inland to escape stormy weather we have stuck to the coast, we love this island and will be back next year to explore the lakes and castles of which there are many and all the towns that we’ve missed. 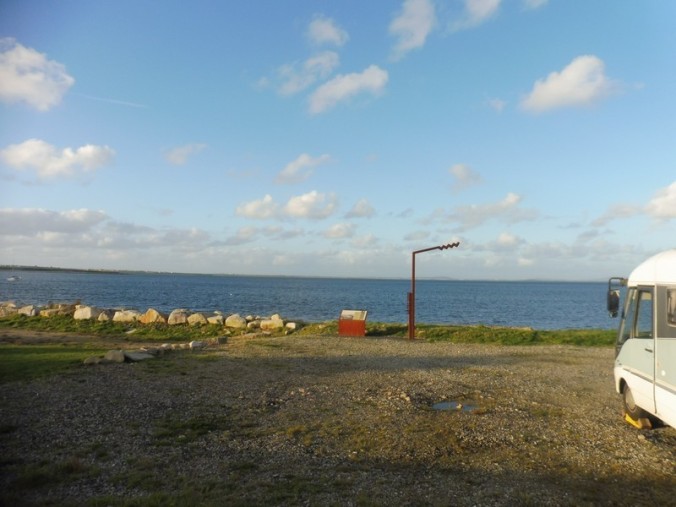 So last night we arrived at Blacksod, Co Mayo, a small harbour

END_OF_DOCUMENT_TOKEN_TO_BE_REPLACED

We are heading towards some of the highest sea cliffs in Europe, Downpatrick Head is a majestic heritage site 5 kms north of Ballycastle in County Mayo, it is a signature discovery point along the Wild Atlantic way, we are totally gobsmacked by the raw beauty of the headland as we arrive, we couldn’t get our coats on fast enough . We’ve decided this will be Pogos resting spot for tonight and the forecast says it will be reasonably calm.

There is a warmish breeze as we walk up the slopes of Downpatrick head, we near a blow hole called Poll Na Seantainne right in the middle of the headland! this huge cavernous gap has literally been formed by the sheer power of the sea, safely cordoned off with both a fence and glass panels, it was an impressive sight, advancing further up the head and nearing the edge, signs everywhere spelling danger! The ground looks like the hexagonal shapes of the Giants Causeway but covered in a soft bouncy mossy earth, it was a bit unnerving feeling movement under your feet when you are only feet away from a precipice. 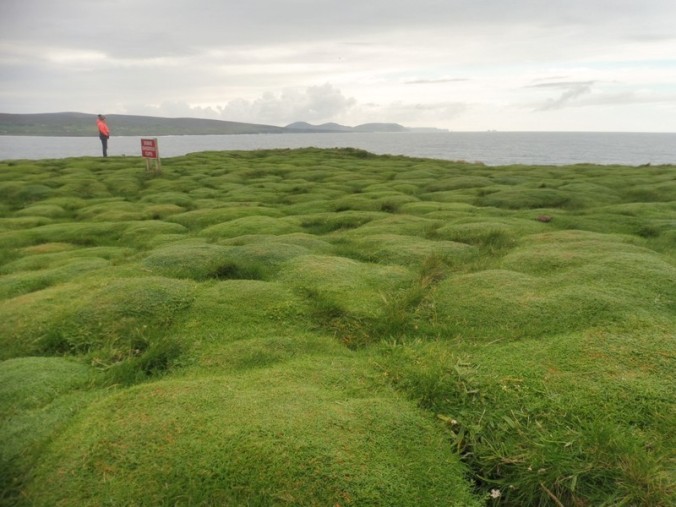 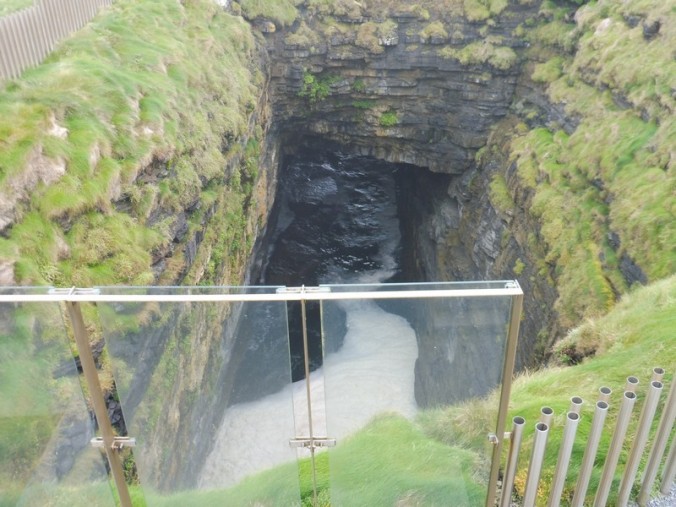 the power of the waves

Heading up to a WW II lookout out we can see to our left the Stags of Broadhaven and Benwee head and to our right Streedagh in the distance.  Carved into the Head with large rocks and granite is EIRE 64, this was to let the American Aircraft know that they were in neutral territory having crossed the Atlantic during WWII. 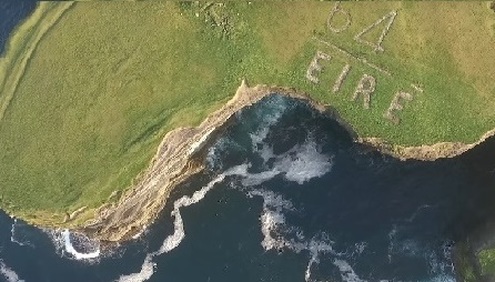 But the sight everyone comes for is Dun Briste, in 1393 the stack broke off in a storm, the stranded inhabitants allegedly rescued by rope, it sits 40 metres above the waves, it’s called a sea stack, many centuries of layered rock and sandstone of varying colours can be seen, and home to thousands of nesting sea birds. 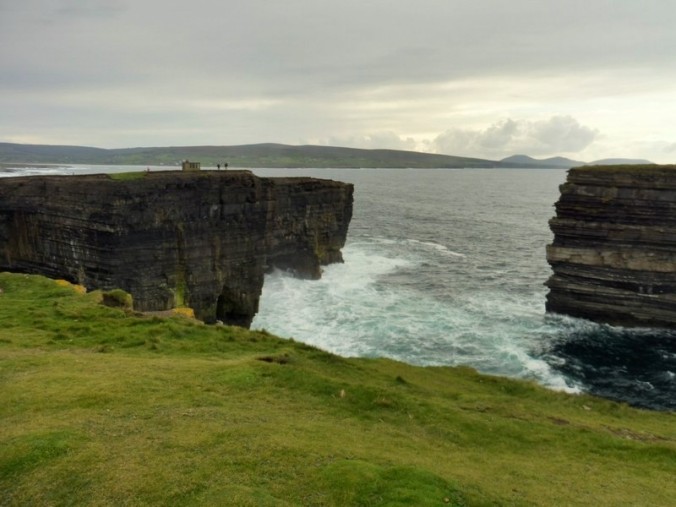 St Patrick is said to have founded a church here, hence the name of Downpatrick Head, pilgrims still flock here on the last Sunday of July known as Garland Sunday to hear mass at this sacred site. 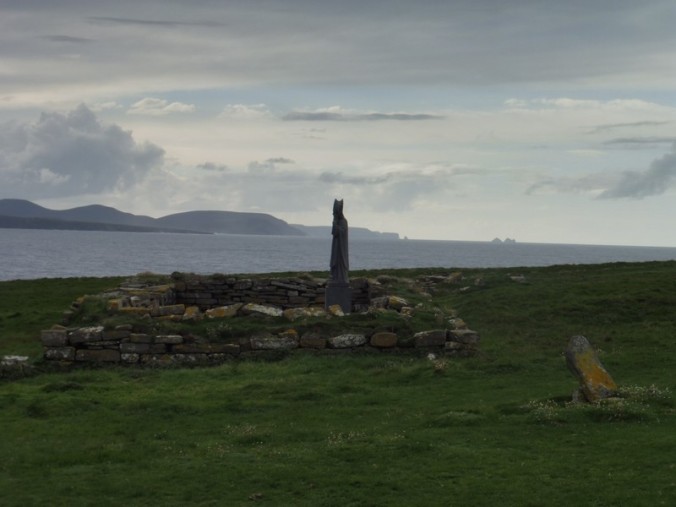 Watching over the lands

Dave couldn’t get enough photos of the waves swirling and breaking against the stack. I had to prise him away and get back to Pogo for some food as it was getting more breezy, the waves forming white frothy clouds of spray as they hit the dark rocks in front of our windscreen, checking the weather forecast again before deciding to sleep here and opening the wine we were reassured the wind speed was no more than 16mph and there were no warnings forecast, storm Ali seems to have breathed its last breath.

Well after Dave took 3 games of Yahtzee from me, scoring 2 Yahtzees in one game and getting an extra 100 points, 2 or 3 glasses of wine had been consumed and the gusts started, Pogo was seriously being bounced about, the Irish weather forecasts we learned later can change up to 4 times a day! Never mind 4 seasons in one day,  we were well chocked up with wood blocks and a fence in front of us but I was not that relaxed, a restless night was had, tucked up tight under the duvet even the earplugs didn’t stop the sound of the waves crashing and the wind scuttling across the roof and trying to find it’s way under the skylights.

Up early at 7am as the skylight sounded like it was going to take off, Dave assures me he’s put an extra two screws in it, having said that though he decides we’re off! At 7.15 am and  we’ll have breakfast somewhere else less scary, heading inland to Crossmolina, well the  R315 is one of the bounciest roads we’ve ever been on, Pogo is a creaky old soul anyway but the cups and plates rattling and chinking, we heard a crashing sound but on investigation it was only the shower screen that we hadn’t clipped back into place, finding a lovely harbour Aire at Crossmolina with 4 motorhome spaces at the top car park, it was deserted so we drove down to the pier a peaceful resting spot and we’ve got breakfast on, bacon butties and then a nap for me and photo sorting for Dave, he needs less sleep than me, all those years of being called out to work in the night with the newspaper industry, later on we were treated to yet another rainbow, so many different weather conditions in one day! 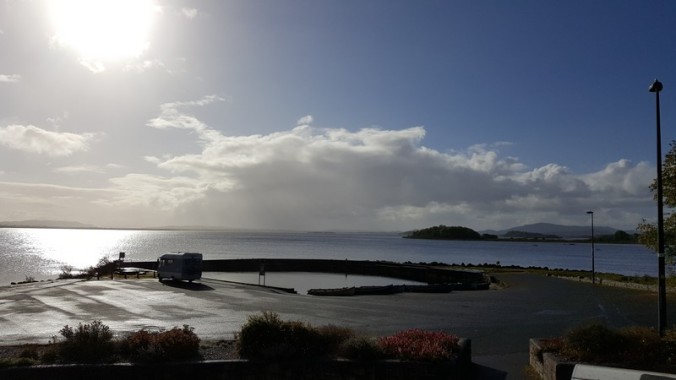 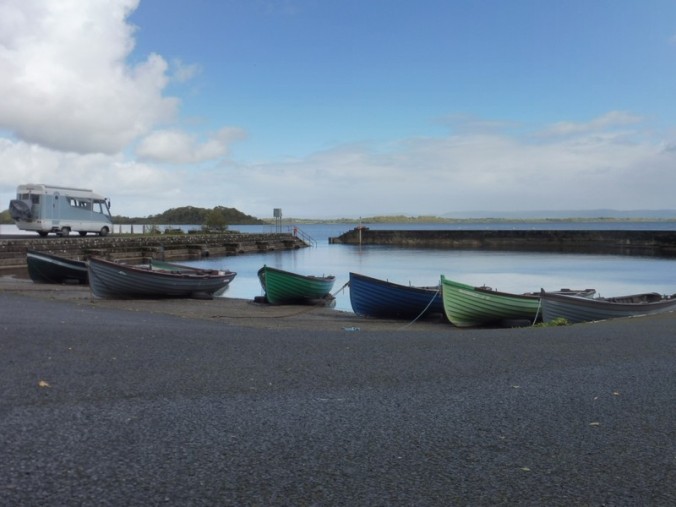 Pogo and his mates

We relaxed for a few hours then made our way further south to Blacksod, Co Mayo, taking in a great road trip on the N59 which travels along the Wild Atlantic Way, we arrived at the square lighthouse at Blacksod pier, we are still tired after our sleepless night at Downpatrick Head, no exploring tonight, so after a tea of poached eggs and toasted sourdough we hit the sack!

Along the West coast of Ireland in 1588 many Spanish Naval ships were wrecked, the Armada was the largest naval invasion fleet ever known at this time, 130 ships and 29,450 men, Philip II of Spain decided to try and overthrow Queen Elizabeth I and restore England to Catholicism. Whilst in the English channel trying to escort a Spanish army from Flanders the Armada sailed in a tight crescent shape to ensure protection from attackers, Fires ships sent at night thwarted their plans and caused panic, the winds changed and the order was given to head North and along the northeast coast of Scotland and down the west coast of Ireland, here from Antrim to Kerry during violent storms many ships became detached from the fleet and floundered, 27 ships and up to 9,000 troops or sailors. END_OF_DOCUMENT_TOKEN_TO_BE_REPLACED

We awoke to drizzle at our parking spot behind the Singing Pub so there is one thing for it, we go with the s recommendation of the barman and head to McNutts in Downings for a proper Irish breakfast, 2 large breakfast baps containing a whole breakfast with white pudding and coffees overlooking the harbour soon sorted us out!

We are heading down to Donegal town but on the way we stopped for a few hours in Letterkenny to meet Sheila whom we first met in Potsdam on our previous European Tour 2018, caught up on her travels as she spends her time between Ireland & Spain, after scones, jam and tea we said goodbye with plans to meet in Spain one day and set off for our evening drive,

END_OF_DOCUMENT_TOKEN_TO_BE_REPLACED

Leaving the Giants Causeway in the afternoon we drive towards Fahan near Buncrana, Co Donegal, on the west side of Londonderry, the city of Londonderry, Northern Ireland is situated right on the border of the two countries and passing through from one country to the other was barely noticeable, there’s no border control, there’s no clear signs of leaving or entering another country, but we did see an old border stop point tucked away that looked worn, tired and beat up, it was a non-event as it should be for all who live here in Ireland.

END_OF_DOCUMENT_TOKEN_TO_BE_REPLACED

We heard it before we saw it! Crashing waves, peeling our eyelids open we peaked out the window and wow! What a spectacle, throwing our clothes on we made our way outside to see close up the sea tumbling, swirling and crashing over the black basalt rocks leaving trails of little white foaming waterfalls before the next powerful surge, our eyes taking in this scene that Mother nature was treating us to, I cannot tell you how much we loved this little spot. END_OF_DOCUMENT_TOKEN_TO_BE_REPLACED