Its Dave’s birthday today, he’s finally caught up with me and is the grand old age of 57, one of the reasons I picked this place was for the sunsets, he just loves sunsets.

We have picked a walk along the cliff top to Criel Sur Mer, and set off quite early before the heat sets in, disappointingly we had to walk on the road quite a bit because unlike the UK where we seem to be able to get close to the edge of the coast be it beach or cliffs most of the land near the edges was private farmed fields full of crops, and the area behind them was rather dangerous looking with signs warning of the crumbling limestone chalk 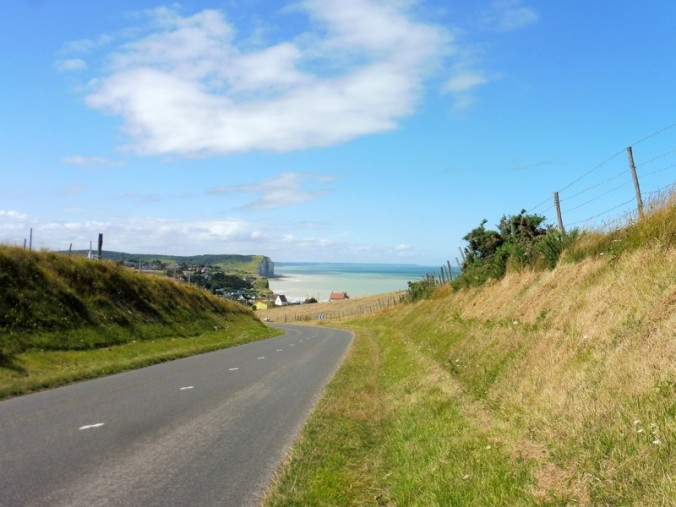 We came to a village on the descent called Mesnil Val Plage and had a coffee and Perrier water on the beach front, it was very quiet with just a few families entertaining their children in a play park, ideally situated opposite the restaurant, walking in to the village we took photos of the unusual 3 storey houses, Dave was excited when he spotted a Boulangerie ,toasted cheesy bacon open baguette purchased and  enjoyed on the cliff top, stopping at a well placed bench to enjoy the views, there is a lovely breeze today and the Birthday boy is very happy!

Onwards to Criel Sur Mer, a busy beach and one with lots of family activities and restaurants, this place was a hotch potch mixture of mostly new with a bit of old, there were placards describing what it used to look like before the war but I don’t think there was much to say about the place it looks a little tired even though there are a lot of campsites nearby with static homes and posh lodges, we sat on some rocks at the edge of the beach people watching and decide it was time to turn around and walk back, we walked about 14kms in total and Dave was glad to have a birthday beer back at Pogo, extravagant at 39 cents per can! We just sat and watched folks walking along the path near to us and Dave’s favourite activity of watching people pitching up their motorhomes!

Dave spotted a bird of prey on the way back, he loves birds.

Dave was really relaxed and chilling out when he sees a paraglider getting his parachute/kite ready to jump off the cliff directly in front of us, a small crowd gathering, we hop over and watch in silence as he waits for the breeze to catch the soft as silk fabric, it flutters up and down and he pulls the cords but it never quite catches the air properly, after 25 mins he goes further outwards towards the edge, precariously positioned, finally he gets his chance and a little warm gust sees him step back before being tugged upwards on the breeze and giving us patient onlookers a show of twists and turns like an aerial figure skater. 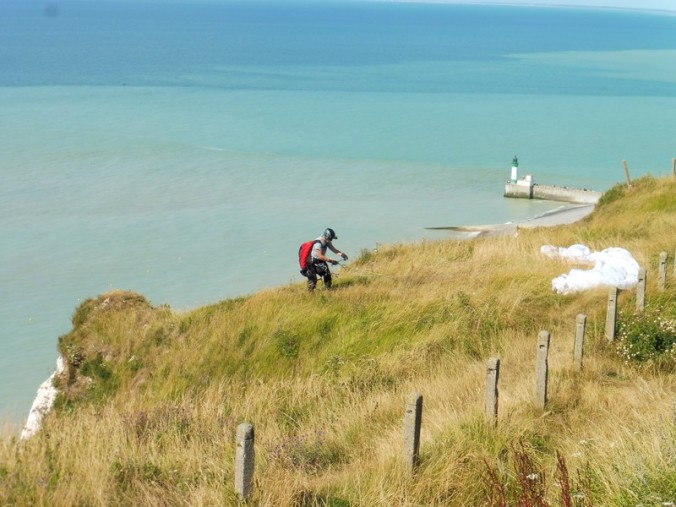 He’s a bit too close to the cliff edge!

Tonight I’m cooking Dave a special birthday tea of steak and chips, onions, green beans and pepper corn sauce, I bought the steaks in Lidl and I have been saving them, we are washing it down with Pink Champagne which we’ve been saving from our visit to the Champagne region, I was very hot cooking in Pogo, we should have bought a small BBQ but the smile on the birthday boys face was worth it as he tucked in and I sang happy birthday to him, a little smile from our Dutch neighbours, no matter what language everyone knows the Happy Birthday tune! 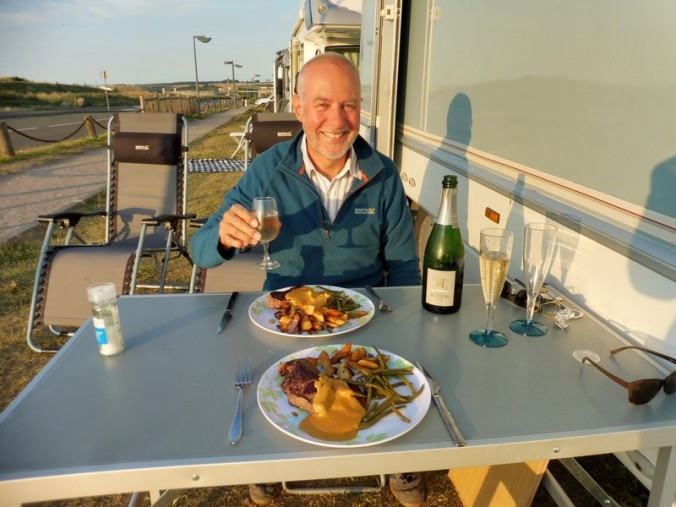 We took the last of the champagne over to the bench by the clifftop we can see for miles and the subtle hints of pinks, oranges, greys, blues of nature showing their colours, mixing and changing like an artist’s palette and painting Dave a birthday to remember.

8 thoughts on “A birthday to remember – Le Treport – France”