Osijek, Slovonia is in eastern Croatia and is it’s 4th largest city . Situated on the River Drava, 25kms from the confluence with the River Danube.

After our morning cuppa Cathy wanted to read and write notes whilst I cleaned the inside of our house!  it is so cool compared to yesterday so it seems a good time for a spruce up, it doesn’t take long to do but it takes a bit of an effort to get started!

Now its sparkling except for the bathroom, I jump in for a cold shower and clean up afterwards.

We are in a very quiet free overnight spot facing the impressive Tvrđa fortress, the occasional car drifts past as they park here and head off in to town.

The hours drift by and we don’t notice the time and suddenly its 4pm! Just before we leave the van a dark Audi creeps past us, a little slower than other cars that use this car park, we watch from behind our ‘nets’ as he stops, gets out, looks around and puts his gun and belt on, worrying we hope he’s not coming over to us, he doesn’t phew! was he special services? his car was unmarked, so maybe. Off we go into town to have a look around, the temperature is similar to home now at about 22c  it’s pleasant to walk around without the intense heat.

Inside the fortress there’s a festival, maybe a catholic festival, there are lots of Virgin Mary and Jesus images for sale along with candles being bought on the way into the churches. The star-shaped fortress was built in 1712 and is very well-preserved, it’s the best kept Baroque building in Croatia. We walk along enjoying the ambience of a peaceful and friendly city, there’s so much open space, parks and wide boulevards with trams running along the cycle ways, paths and roads. We pass the cinema dated 1912 and it could be a film setting from a Russian film.

The town feels vibrant as it’s a university town, dominated by the Drava river. We end up at Trg Square right in the centre except the square is actually triangular!

The triangular square in Osijek 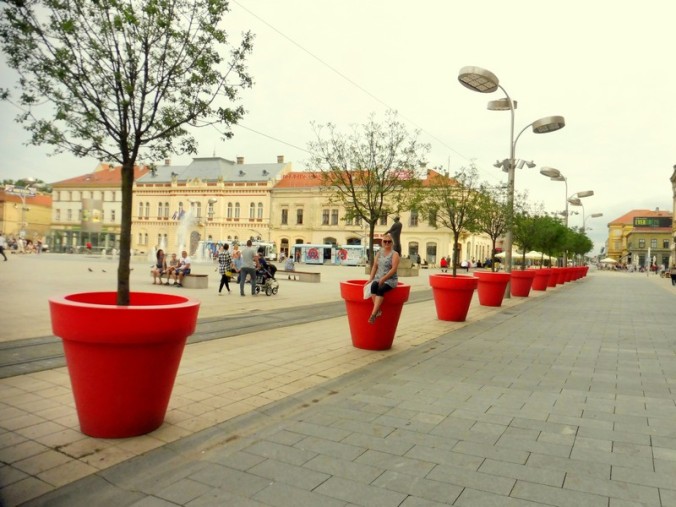 The Roman Catholic St Peter and St Paul’s cathedral has a presence and dominates the town, built in 1898 by the Bishop of Dakovo, Josip Juraj Strossmayer, an Austrian, as it reaches the skies, it stands 90 metres high.

We find ourselves by the riverside, heading back to Pogo for tea we fancy a quick beer overlooking the water.

We are hiding in the bar from the imminent rain, all the cushions have been whisked away from under us whilst we are sitting on them, put away in the back and the parasols taken down and tied up! Inside we go to finish our drinks.

We leave the bar and go over an impressive modern looking pedestrian bridge called Pjesacki Most, built in 1981 it’s 35 metres high, spans 210 metres over the River Drava. 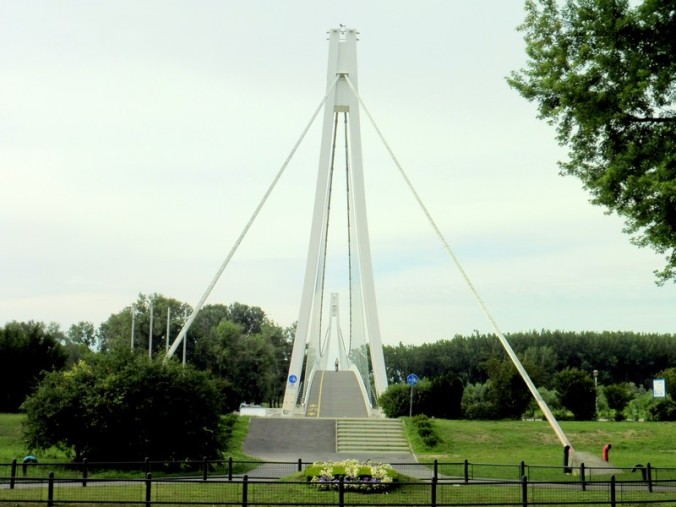 Along side the river we come across what looks like a family activity area, with skateboard ramps,cycle path, and a water park with slides that is closed, it looks new but it is fenced off, through the fence we can see 4 very large swimming pools, it seems strange it’s not open. Once back we have an evening meal of Cevapcici and greek salad.

Cevapcici also known as Cevapi, has its origins in the Balkans, and very popular, usually serves 5-10 pieces on a plate or in a flatbread, often with chopped onions soured cream, kaymak and ajvar which is sauce made of red bell peppers. they are not stuffed in to cases, many types of meat can be used but always with lots of garlic.

we didn’t eat all of these, we save some for tomorrow!

As the fairground sounds filter through the calm still evening air we appreciate our fortune of discovering this free relaxing spot.