Today is the day for the rafting and we’re excited! We’ve only done this once before in Costa Rica and the water was so low that there were hardly any rapids, we bought a day package from bluerivertara.me €45 each includes breakfast, lunch and 2 hours rafting. Dave had an omelette with cheese and I had the funny shaped buns called Priganice they are like little donuts but not sweet, deep fried bread balls served with apricot/peach jam and salty feta, delicious but way too much for me to eat, no problem for Mr Emms to finish though!

The guy arrives and takes us up stream in a VW Transporter to our starting point. Wet suits on and life jacket and we’re off meeting Karen & Howard from London who were there with their guide Bojana Sekulic for the day, Bojana works for Undiscovered Montenegro as a guide and tour consultant and we’re glad she’s here as the rafting guys have no English, it was so much fun, scary enough for me, I don’t know what level (or rating) it was, maybe a 3 -4? 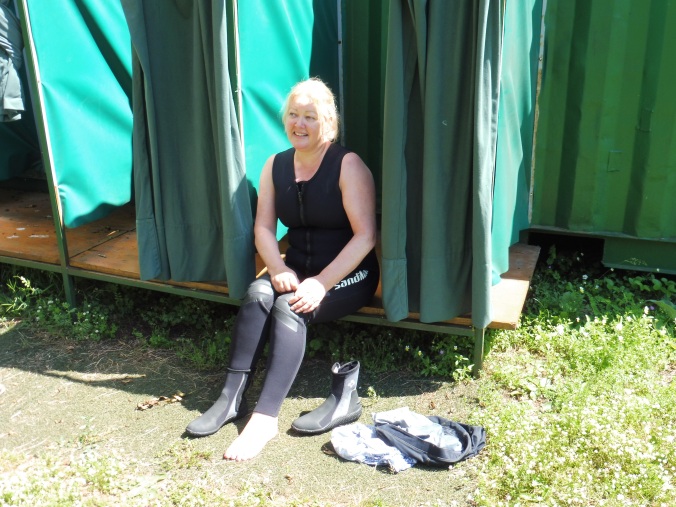 The water is so turquoise, the steep gorge bearing down on us, Dave was in front with me behind and he kept looking back at me with the biggest smile on his face, he was definitely having a good time, the guys made it fun for us as they were teasing each other about their rafting credentials and Bojana interpreted for us. I asked one of the guys how long he has been rafting and he said this was his second time! Bojana told me he was joking! Half way we pull in and climb just a few steps to a waterfall literally being forced out of the rock by sheer force, there’s a little pool we can go and stand in, well I’m not missing this! In we both go and it’s so cold and very strong, we keep our helmets on, Bojana takes a photo for us, thank you Bojana! 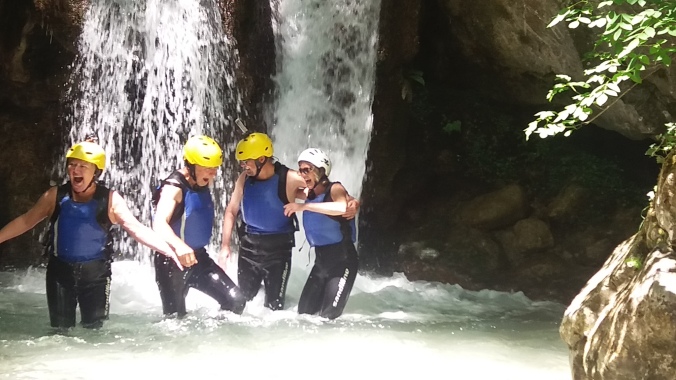 There is a bar here and they bring us some lovely cold beers its then that she explains that the waterfall is in Bosnia, but the bar is in Montenegro, strange eh!? 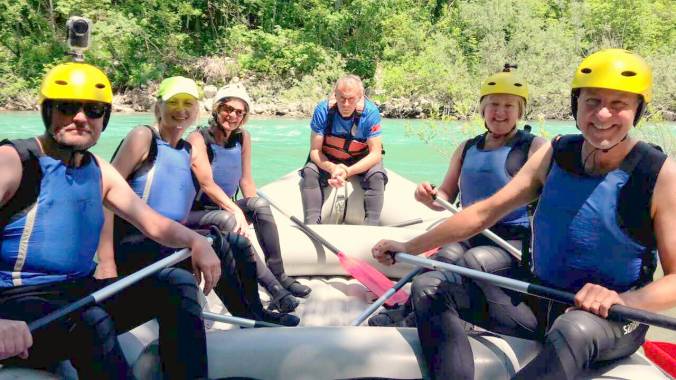 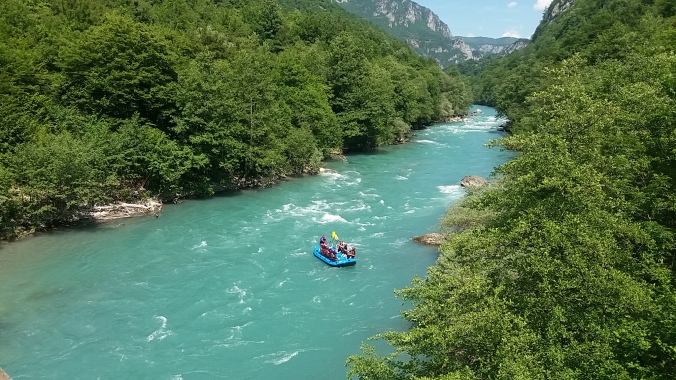 Another wonderful hour along the Tara river and we are back at blue River Tara for lunch, pre-ordered trout for me and meat for Dave, everything was delicious,

We got chatting yesterday to the German couple parked at the rafting site and they recommended a route to Zabljak which is where we are heading and which we were a bit cautious about, Šćepan Polje to Trsa, our sat nav doesn’t recognise it even though we can see it on the map, we spotted a narrow tunnel with the Trsa signpost on the way here & Dave said “ I’m not going through that” the German guy had come through it in his big yellow beast of a Camper.

The yellow 7.5 ton beast from Germany!

Well, if he did then we can!

The road after the tunnels is amazing, narrow roads but beautiful huge gorges, we climbed and climbed

No signs to anywhere for miles and miles, not passing a single other vehicle, after 23kms we reach a crossroads in the middle of nowhere? where do we go now?, no signs to anywhere but bizarrely there’s a shop and bar in front of us, it’s the only building here! It was like something out of a western cowboy movie, Dave gets out and walks towards the bar, out pops the Camping Evergreen man, how weird, he’s miles away from Pluzine, he’s having a beer and he recognises us and greets us with a huge smile! which way to Zabljak, please?, that way for 43 kms, we turn in that direction and marvel at the coincidence.

This 43kms has to be the most amazing road we’ve ever driven on, the road was single track for the most part, wild and rugged then green soft velvety mounds with pockets of wild flowers, bright red poppies, wild roses, gorse, lavender and little purple flowers like Calendula. The road twisting and snaking up and down around the mountains, dark clouds in the distance following us and creating a moody, lonely atmosphere, we drove for over 2 hours, the mountains becoming larger with snow- capped peaks and splodges of snow on the dark rock looking like a huge black and white cow in the distance, we were in awe and then we spotted it, Bobotuv Kuk, 2,523 metres high, snowy stripes lining it’s flanks it was just as awesome as Bojana said it was.

Annoyingly the camera battery was flat! we got lots on the i phone but theyre not doing this wondeful area any justice ,So we have used some dash cam material.

What an amazing road, we are so glad we took it now.

For the whole road Sat Naff had no idea where we were and neither did we really, the light is fading when she finally kicks in to life and we see a long slow decline down towards our chosen camping site Kod Boce. Sat Nav found it and yippee! it’s only €8 per night! We had climbed 1,963 metres in Pogo and to quote Bruce Forsyth- didn’t he do well!

The route from just south of Specan Polje

We’ve had an amazing day and one we won’t forget.