This morning we set off up north and west to Pluzine, we are en-route to the Tara river, 60 kms of intense scenery later we pause for coffee at a scenic point where we find a sort of ski resort called Pluzine, pretty much closed up after winter and not yet ready for summer, some smart Hotels and alpine like houses or apartments intermingled with a few grey shabby communist looking buildings some of which it seems never got finished and some just never got painted, we stock up in a run down IDEA supermarket, they have much of what we need but we’d love to find a Lidl for the familiarity, we drive along the river trying to find a free camping spot trying to claw back some of the repairs money on Pogo, we couldn’t spot anything and a cop car passed us twice so we headed back to Pluzine parking high above the lake on a piece of rough ground, Dave goes outside to put a wooden chock behind the wheel to ease my paranoia and not wanting an ear bending from me, a guy pulls up giving him a business card and points over there -Kamp Evergreen, Dave can’t see anything but the guy says it’s €10 with electric and water, ok we’ll just go there, when we pull up he’s waiting for us and directs us into what we can only describe as a cattle pen which he has proudly just finished making, the new concrete is set hard and there’s electric and water as he said, also toilets some little log cabins and a bar and tiny restaurant inside an old stone farm building. We went for coffee to the bar and we have noticed that in Montenegro the staff out number the punters by at least double, there were 2 male waiters and 2 ladies one of which was the cook and the other was cleaning the already clean tables, before we headed back to Pogo Dave took a look inside the restaurant, he said it was cosy and cool inside being made of stone with small windows and there was an old record player with 45 rpm single playing Tina Charles, we are not eating though as I’ve made a chilli in the Mr D cookpot, prepared this morning, it will stay hot for 4-5 hours, we’ve even eaten after 6 hours and it’s been hot enough. 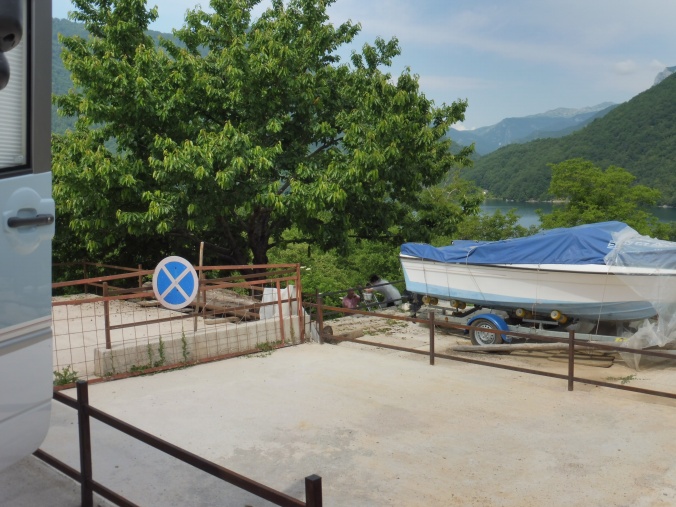 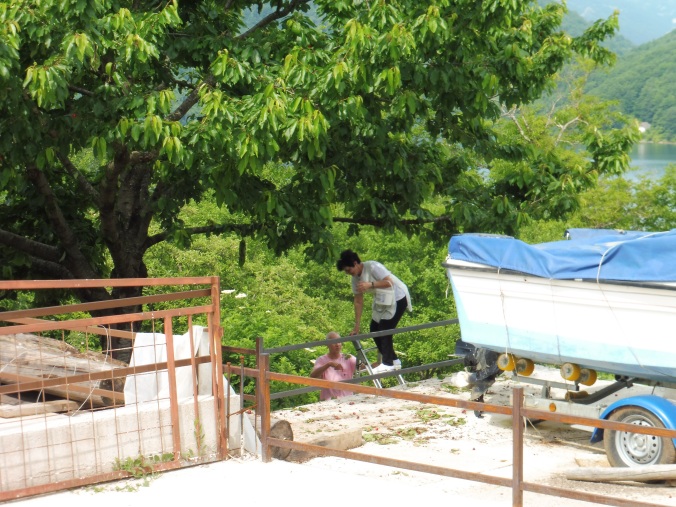 We are on the edge of Piva Lake, Pivsko Jezero, we can’t see it as we are high up but there is a sign through the trees on the edge of camp ‘’To the Beach’’ don’t believe the signs! We trundle downwards slipping a little on the rich red peaty soil and rocky stones, down and down, finally through a clearing we see the water it’s just a  few large rocks at the water’s edge, a fish head casually slung into the bush is evidence of it being a good fishing point, I see a line set up 30 feet away but there’s nobody  here, I love to swim and especially in cold water, I haven’t swam in a lake yet so in a jiffy I’m into my costume and warily try to find a good access point, the current looks quite strong I can see it moving with little ripples of waves so I just step slowly holding onto a rock and choosing a spot where the water is quite still and pooling inbetween the rocks, it’s surprisingly not as cold as I thought it would be, Dave’s not coming in, he thinks I’m mad but he’s holding a very large branch in case I need to get out, no diving in to save me then ha! He says I must have been a fish in a former life, I am out within 10 minutes and we sit in the sunshine on the warm rocks enjoying the total sense of freedom, no people, no boats, so quiet, the only sounds are the birds and the crickets chirping away, we wonder what’s across from the lake in the dense pine forest, what creatures live there maybe bears? We have been told they are here, how lucky are we? says Dave. 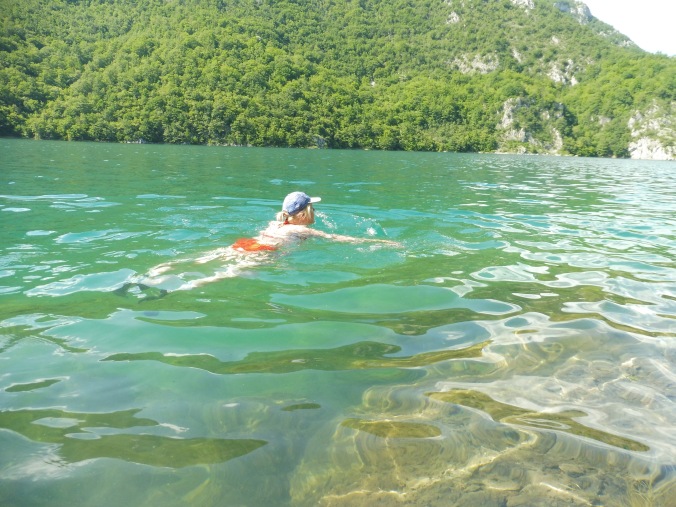 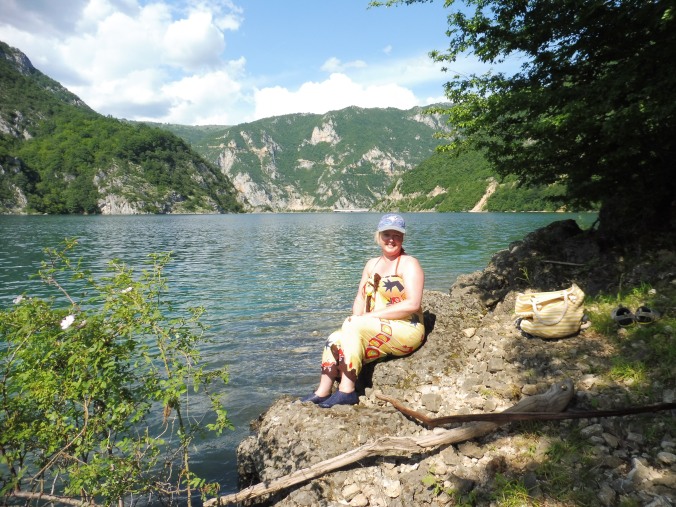 wrapped up on the warm rocks

Back at Pogo we have no shade and the heat is intense, folks are coming to the tree just near to us and picking something, we don’t know what and we can’t see any apples or oranges or pears? We go over to take a look and see that it’s cherrys, lovely dark red cherrys, a lady passes a handful to us and we try them, they’re delicious and sweet but just a little hint of sourness too, we go to get a bowl and gather a few ourselves and that’s when another small group arrive, they don’t have a bag or a bowl they’re just stuffing them into their mouths, then they are gone and a guy in smart trousers and shirt comes and he’s up into the branches eating as he goes, what’s going on? Is this some kind of mystical tree? Over the course of 2 to 3 hours 30 people must have come some people just take one or 2 cherrys, this tree is also on a precarious edge, some climb into the tree disappearing for a while whilst they try to reach the best fruit at the top, reappearing with bags or mouths brimming, Dave gets his ladders out, the ones I’ve been teasing him about lugging all around Europe and never being used, he offers them but no they want to struggle for the prized cherrys. 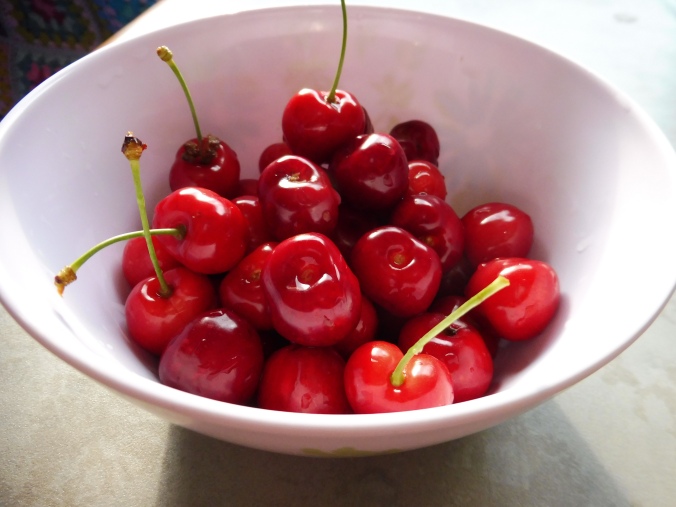 4 thoughts on “Cherrys are not the forbidden fruit, Pluzine, Montenegro”