We left Camping Rozac on Ciovo this morning after watching a thunderstorm at 8am, it was so hot last night that we slept with the windows open and just the insect blinds pulled up, we normally just have all the skylights open and the Heiki roof light above the bed open with the insect nets pulled across. Dave has been chatting to a guy from Slovenia, they’ve had the maps out and Andreas has given Dave some tips on where to go, not sure when that will be but we do have Slovenia on our bucket list, he asked for our blog details and told us he is planning to go to Scotland sometime.

Paid the site bill, it seemed complicated, 439kn. approx €29 euros per night, it’s gone up now it’s after 1st May, It includes registration fee ( they didn’t mention that on checking in) and tourist tax of €1 each which we did know about, and it’s ACSI discounted with 5% discount for paying cash, getting a bit steep these pitches.

We got stuck in the traffic leaving the island to get over to Trogir to cross the swing bridge, it took us an hour to do 3km and the locals were tooting their horns like mad! we had a reasonable drive to Starigrad and it was nice to see the Velebit mountain range again, we got to the Camp Plantaza were we had been a few days earlier and parked outside to walk into the restaurant to pick up my hat, the young girl on reception at the entrance insisted on helping me, I explained I’ve come to pick up the hat and she says “no hat has been found” I replied yes it has, it’s in the restaurant, the owner is keeping it safe , “no” she says it’s not here and the owner is in Zadar! I walked to restaurant anyway and see a lady, explain and she nods and goes inside and brings out the hat (smiley face icon) I’m so glad, imagine if after all that it wasn’t there!

The lost hat, I’m very happy to have it back! 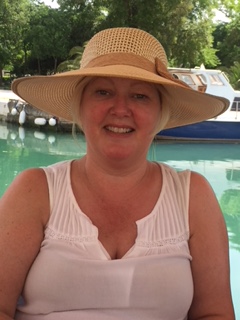 The new hat, I’ve got a spare one now!

Whilst we are here we pop back in to the shop that sells the tasty spuds and of course it’s an excuse to buy another bottle of the Grasevina wine, We park up in Starigrad at the side of the road and enjoy the leftover lentil and tasty spud stew from yesterday looking over towards Pag island.

We did some research and we are off to Zadar, it’s raining so we stop at a huge InterSpar, about 4km outside Zadar, it’s like a large Tesco or Asda with a separate Boots type store inside, we have only been in Lidl or a local store so far so we manage to find some things we need, like I lost my Venus razor, my legs are showing signs of its absence, we need more sun tan lotion and some groceries.

I have decided to have a tidy up of all the cupboards rearranging the pan cupboard for easier use and storing all the clothes like jumpers and woolly hats that will not be used again for quite a while we hope! under the long bench seat so we’ve more room in the wardrobe now, I’ve realised that I’ve brought too many clothes.

We arrive at about 5pm to the car park in Zadar city which is free, and we can’t see any no parking signs. It starts raining heavily so we stay inside the van with the windows open as its humid We stayed in and typed up the blog, made eggs on toast for tea, the sky was really dark and then a huge thunder clap and flashes of lightening, the van vibrated from the heavy thunderstorm, the car park is heaving with people parking anywhere, no designated bays, I can imagine what some might say as we were taking up two spaces.

The storm cleared the air and we slept well.