We are going to Camping Krk on the Island of Krk about 20 kms south from here, it’s only a short distance but we fancy a change of scenery, we see the usual yellow, blue and red advertising board for LIDL, it looks brand new, it’s 1km from the site, and we need supplies, 570 kn later we have stashed the goodies away and arrive at Camping Krk.

What a site this is, everything and everywhere is of such a high standard, admittedly we were impressed from the moment we arrived.

So this is how it works

We walk around the site discussing views, locations near facilities like the pool which is open! (first one), outlook, shops, shower block and importantly prices as they ranged from €19 to €37 per night, plus an additional €1 per person local tax.

It’s hot, very hot and there’s no breeze, it’s a large place and it takes us maybe 30 minutes wandering around choosing this one and then that one, that’s the trouble with having choices, we like few choices, we like free places with maybe shall we slope that way or this way haha! Okidoki, its pitch E14 for us then, the site is busy maybe a caravan or motorhome driving on every 3-4 mins, we hurry back to reception and breathlessly request pitch E14! Oh, the lady says you can’t have than one it’s booked all summer! I get annoyed thinking (and Cathy said it showed, apparently, I gawp open mouthed when I’m annoyed like something that should have a hook in it she says)! why didn’t you mark the ones that were unavailable on the map or at least on a sheet of paper! Now we are back at square 1, and we can’t remember the other ones we might have liked! Of course, we never thought to have a second or third choice lined up, so off we go again around the site only this time we are hot and bothered, we wanted to get set up and relax.

We picked another spot, we do the admin and drive on, well I drove on, Cathy was outside on the pitch gesturing which position to put Pogo in. There’s a slight slope and it’s tight’ish to drive on, but I hadn’t thought it through properly and I end up with the awning and outside step/door facing the wrong way! Cathy’s face was a picture! No doubt thinking that all the other people were watching me make a fool of myself…..  I’ll sort this out I said to myself, I’ll turn it around on the pitch, well I should have known better, I’m now in the middle of a 27-point turn! And I think Cathy has walked off with the embarrassment! I should have backed out initially (like she said) once we had realised my mistake and then reverse on, but we learn as we go! What a plonker Dave erm Rodney!

We had lunch outside in the sun before going for a dip in the infinity pool which was sublime, this camp site would put some hotels to shame, everything is of high quality with an extremely high level of cleanliness. We would highly recommend this site, especially to families with children, the level of kids pools, and water activities is excellent.

Cathy enjoying herself in the infinity pool at Camping Krk

In the early evening we stroll to Krk town about 20 mins walk away via the road, didn’t fancy clambering on the rocks and taking the shore line walk. We see a lady’s hairdressers on the stroll and Cathy goes in to find out about appointments, times etc and books to come back tomorrow, she says it’s 7 weeks since she has had her colour done and she doesn’t want anyone to know she’s not a natural blonde! I won’t tell anyone promise……..

The Medieval town walls of Krk are so well preserved, the streets are so narrow in parts they are only the width of one person, we love looking at the street and local life, how they live here, the use of their homes and their space.

The buildings, businesses, offices, bars, restaurants and cafes all compliment their surroundings and integrate in to the fabric of the town. Each narrow path leads to surprising parts of the old town, plus it’s on a hill so the paths are uneven, raising or falling in each direction, some look like marble or Travertine and Cathy says they may be Travertine as shes’s read something somewhere but can’t recall.

It’s a fortified town dating back 2000 years with walls running the full length of the town, the Francopan castle on the Kamplin square, was built between 12-18th C. The cathedral was built with the left over remains from the Roman 5th C church, and the Franciscan & Benedictine monasteries. The tower in the Kamplin square was built in 1191 ! 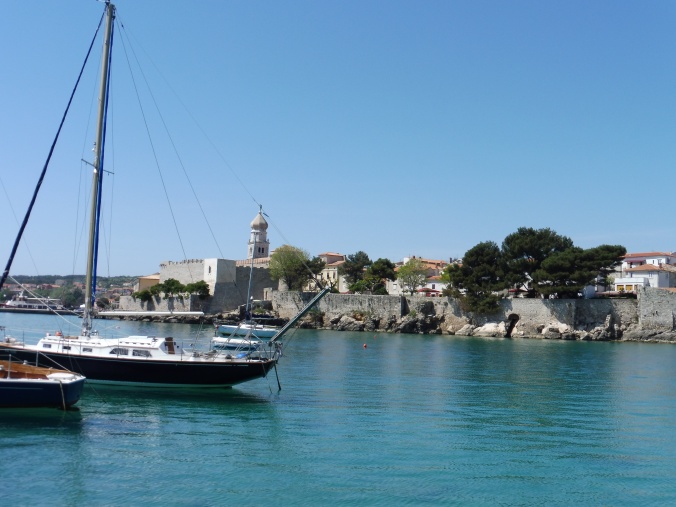 The old smaller harbour outside the town

We find ourselves at a small pretty harbour with the usual drinking and eating establishments, we casually wander on ending up at the base of the castle on a small promenade close to the harbour walls under shady green trees. It’s hard work with this heat and all this walking, time for refreshment! Drinks arrive with the food menu and the next thing we know we are choosing food, something to share maybe, well they only do pizza so that’s good sometimes we like having no choice.

The guy recommended a pizza with a spinach and dough base, we ordered a veggie one with the spinach base, it was really good, no tomato base, instead Gouda and sour cream, leeks, onions, courgettes, broccoli and our favourite olives. Cathy asked the guy about the pizza building as she loved the walls inside and he gave us some fascinating facts and described how it used to be an olive oil press right here inside with horses walking in circles driving the millstone over the olives, there’s a well over there closed in now and we use the room for storage, the olive vat is now a huge ceiling lamp. All the internal stonework has been carefully restored by himself and he was very proud to show us and it looked beautiful. We love talking to the people who live and work in the places we visit, you find out so much more and they love you for asking about them and their lives.

The next day Cathy goes for her hair appointment, she’s surprising chilled about this and I go back in to the old town of Krk for a few hours. Time is moving on and Cathy texts to say she’ll meet me a little later than expected whilst I am having a beer and a local apple and sugared turnover, Whilst the cat’s away yum! no problem as I chilled out.

We meet up a little later after I have explored the place walking everywhere and in particular the two harbours here, one outside the old town walls and the other more commercial for boat trips and repairs etc.

Our lunch spot on the left

Cathy hasn’t eaten or drank since about 8.am this morning so we are now sitting looking over the harbour choosing a meal. Slucice for me which is the Croatian noodles a bit like pasta but softer almost like gnocchi, the sauce was shrimp, spinach, wine, garlic and butter and I could have eaten it twice it was that good, prawns for Cathy , skewered shrimp on a bed of rice, which she says was flavoured beautifully and a lovely bean and Sauerkraut salad, 4 small draught beers approx. 30cl, the bill was 280 kunas, €35, £31, which was pricey by Croatian standards but the food was of an excellent quality and the view over the harbour was superb so we were in prime position, we’ve decided we have to stop this holidaying eating as it’s killed the budget but I wanted Cathy to have a lovely afternoon as it’s quite a big thing for the ladies getting your hair done in another Country with the language barrier and different products/colours etc, she was a bit worried about it. 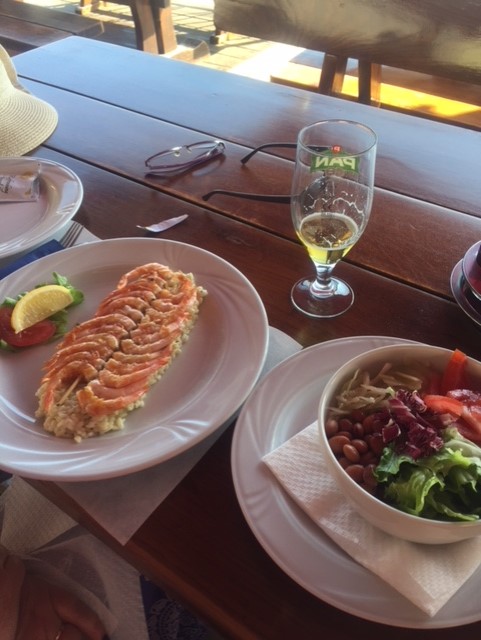 Our last supper,haha, watch this space

As we head back to the site and it’s all up hill and as we go past the hairdressers Cathy explains that the price, service at the hair appointment was very good, £27 maybe! Cheap as chips apparently ….. I wouldn’t know as I haven’t got much hair!, I think her hair looks fantastic.

Time for another dip in the pool in the late afternoon sunshine, we tried the local camp drink of red wine and Fanta orange, when you swirl it together it tastes similar to Sangria, followed by a walk down to the sea, where we park ourselves on a finger of land on the white framed decks with cream linen curtains (feels like an expensive hotel not a campsite) looking back at the old town walls across the bay catching the last 30 minutes of the suns warmth before it slowly slides down over the hills.

Catching the last of the sun