We knew there was a problem with the low pressure in the water system, the toilet flush was weak, the kitchen sink taps and shower head flowed slowly.

When the mobile repairer came to fix the list of jobs including the badly wired 240 volt electric socket, the above problems were on the list to remedy (August 2017)

He discovered the micro switch in the shower tap was faulty and has to be replaced, circa £30, whilst we considered what he had told us, he mentioned that if the other tap micro switches fail it will be £30 each time, there are two kitchen and two bathroom taps with micro switches.

Whilst Cathy and I talked about this latest problem, the repairer suggest that we could fit an in-line Whale water pressure switch, the benefit being that even if the other tap micro switches fail later on, the pressure in the water system would remain the same and continue to work as normal.

Well that’s it then, lets fit the in-line pressure switch and eliminate any potential problem further on, how much will it be ? £35 including fitting came the reply, ok please do that then.

The repairer cut the water pipe close to the water pump outlet, amended the wiring and installed the pressure switch. 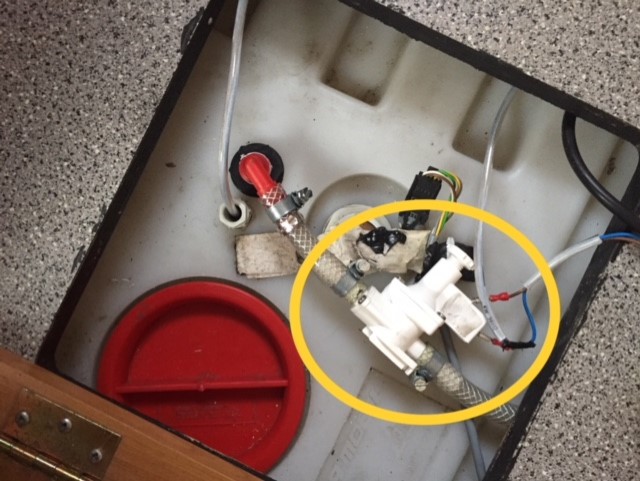 In our outing to Oswestry in October 2017, we felt there was a difference but only slightly in the water pressure and flow. It was reassuring though that any potential problems with micro switches will not affect the water system.