We heard it before we saw it! Crashing waves, peeling our eyelids open we peaked out the window and wow! What a spectacle, throwing our clothes on we made our way outside to see close up the sea tumbling, swirling and crashing over the black basalt rocks leaving trails of little white foaming waterfalls before the next powerful surge, our eyes taking in this scene that Mother nature was treating us to, I cannot tell you how much we loved this little spot.

We had to peel ourselves away from Ballintoy and head towards the Giants Causeway Northern Irelands only UNESCO site, we want to do some walking so opted to park 3.5 miles away at a large car park at Portballintrae and an easy way marked path over the cliffs, the local shop owner tells us not to go through the visitor centre but to walk through the tunnel, it’s free to visit the giants stones but if you go through the visitor centre they charge £11.50! although this includes an audio guide etc it’s silly money.

The walk along Bushfoot Strand also known as Runkerry beach, wild and unspoilt and then along the cliffs to the stones was lovely and in parts it ran along the links golf course and a disused railway track and was close to the cliff edge, there was a strong breeze but we like walking in cool weather rather than hot so we were quite happy!

The rocks consisting of 40,000 basalt columns were formed when molten rock was forced up through fissures to form a plateau, rapid cooling lava contracted and this led to the formation of the hexagonal basalt columns, the tops of which is what you see and walk on, although you maybe prefer the legendary story that a certain giant by the name of Finn McCool is being threatened from across the sea by a Scottish giant Benandonner, enraged Finn throws chunks of the Antrim coast in to the sea forming a path for him to cross over the sea and teach Benandonner a lesson, it was a bad idea, Benandonner is massive!

Finn beats a hasty retreat and is followed by the giant, only to be saved by our heroes quick thinking wife who disguises him as a baby, the angry Scottish giant sees the baby and decides if the baby is that big then the daddy must be huge! Off Benandonner goes back to Scotland removing the stones behind him as he goes.

We had a lovely time scrambling across the stones and walking a trail as far as we could go as the pathway was now closed off due to its hazardous nature.

I stopped at a turn on the path to look through a hole in the rock whilst Dave was taking photos behind me, the wind rushing into my ears I heard Dave shout something and turned around and he was nowhere to be seen, I walked back a few metres and forth on the narrow path, I peered over the edge of the steep unfenced cliffs, my heart was pounding, he couldn’t have gone past me and round the bend I’d have seen him?? I feel sick now and start sweating, I’m still trying to peer over the precipice then he re-appears from around the corner! he wanted to take a photo of me looking through the hole! I’d like to say that I said “ah there you are, how lovely’’ But you know I didn’t!

view from the trail looking back at the giants stones

We took a flask of tea with us and shared a chocolate bar whilst watching scores of people with headphones and audio guides walking along who had clearly paid £11 for the privilege, mostly they had arrived by coach and we heard many languages Austrian, Chinese, German, Dutch, French, Spanish, English those are the ones we recognised there were many more that we couldn’t make out. 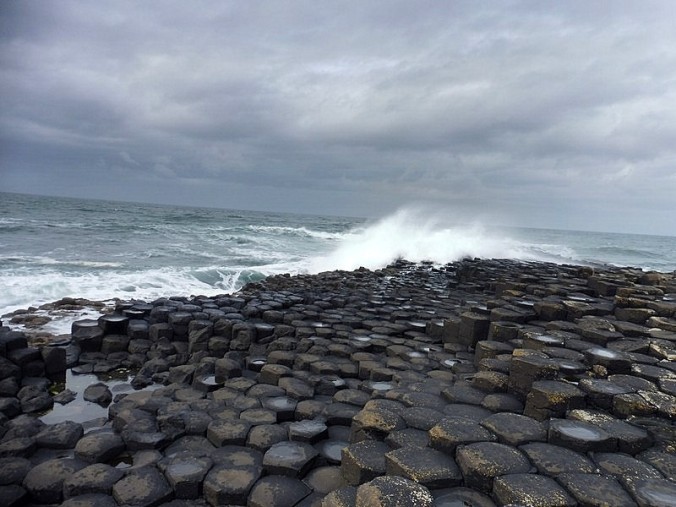 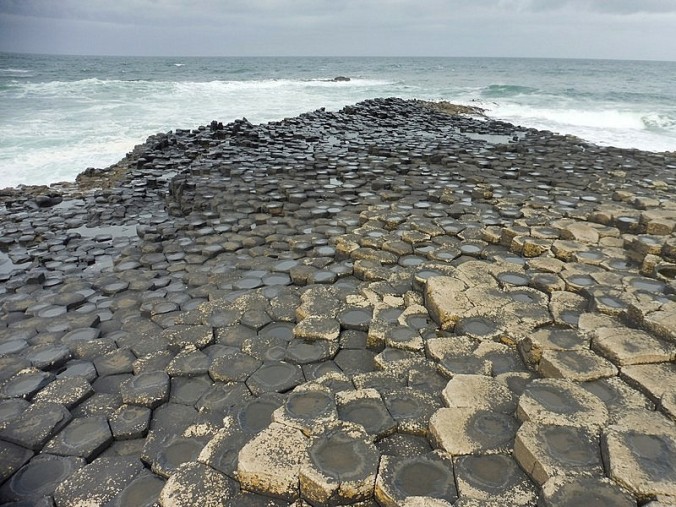 It was a cool breezy walk back to Pogo and we were warmed by the friendliness of the Irish, every single person greeted us before we had chance to greet them, cheery hello’s all along the way.

4 thoughts on “Ballintoy Harbour & on to the Giants Causeway”