Pogo is still parked at the Stellplatz in Berlin, and today we have a busy schedule to see most of the tourist sites in the city, luckily they are all free which is brilliant for the budget, the all day travel ticket for all forms of transport is €7, there is a Berliner city card but the guy at reception said don’t buy it unless you are going to lots of museums as it’s not worth it otherwise.

Our first stop was the Berlin wall memorial which is an outdoor area with part of the original wall joining at a corner where East meets West this is also the place of The Document Centre, a museum dedicated to the people’s lives and struggles over the years no matter which side you may have lived on, the original barbed wire fence thrown up overnight and strewn across the roads with guards patrolling it wasn’t enough to stop the Communist held East Berliners from leaving for the West, to start with you could cross the border to go to work but after a while permission had to be sought to visit family, you would be given a day and a time to cross and it could be months apart, in order to stop the exodus from the East the drastic step of building the wall was undertaken. 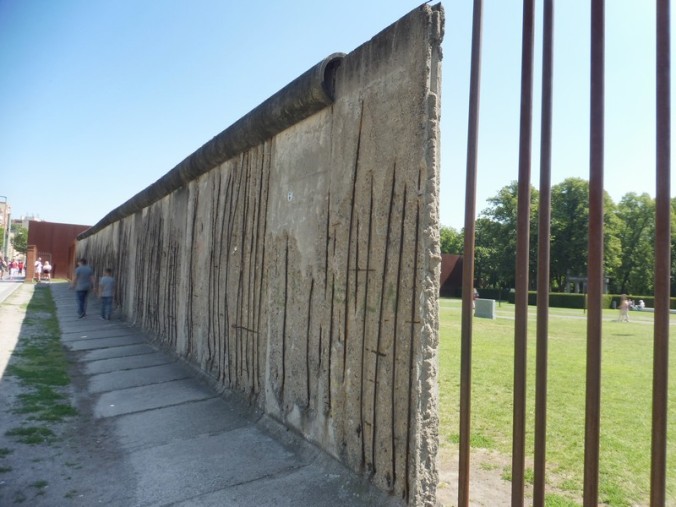 The videos inside the document centre were interviews of survivors telling their personal stories some just teenagers at the time others already parents, the stories covered the barbed wire fence to the wall going up, escape plans, tunnels being built under the wall people turning up in shifts to tunnel through the basement of houses and people turning up at all hours of the day to carry a bag of rubble away secreted in handbags and shopping bags away from knowing eyes, and stories for the lucky few of emigration if their application was successful.

documentation centre opposite the wall

We heard stories of families jumping from apartment buildings 2 stories high to try and clear the wall, not everyone made it. There was a guy on the video who told his story, he scrambled across the rooftops in the dark waiting, but he was spotted and had to jump, injuring himself in the process, someone helped him to his feet and he ran to a passing bus and the driver took him to hospitable, injured but free!

Outside at the wall memorial in the middle of the capital located at Bernauer Strasse and the corner of Nordbahnhof train station there was a 3D metal map showing the set up of this time, it shows the wall itself with the inner wall that was built just a couple of metres behind, one wall not being enough for the bravery of some, patrol towers set up between the two, metal spikes lining the ground beneath the first wall so that an escapee would likely be unable to flee any further towards the second wall their injury likely to be too severe, Berliners referred to them as Stalins lawn, sand on the ground to show any footprints.

Part of the wall in this area was built on the Jewish Cemetery most of the bodies were exhumed and buried elsewhere but there were some WW11 graves that were left, and it is said that the wall was built on top of them.

The area around the wall is green and peaceful, everywhere clean, the buildings and apartments smart and freshly painted, bollards indicate the timeline of events spaced wide apart, there was a photographic display of people known to have died trying to escape the wall, some small children, one just a baby and there was a little candle next to his picture, it brought tears to our eyes.

pictures of those who died trying to cross the wall, it’s double-sided

We get onto the train on the corner where the wall met Nordbahnhof train station and headed to Brandenburg Gate, we were surprised as we walked in the direction of the gate at how little traffic there was, when we got nearer we could see why, there was a huge TV screen visible through the front of the gate, the road blocked, what’s that all about? We were surprised to see it there? It’s huge and that’s saying something as the gate is 26 metres high.

We can’t walk through the gate and it’s blocked at the left hand side so we go right and there is a security area to go through where we were frisked and bags checked,  we soon saw that the whole area was set up for the World Cup and had apparently been like that for a month, the whole route along was pedestrianised for the football, large TV screens every 100 metres with bars and snack huts lining the way with tables set up for the viewers, we head back to the main stage area discussing whether to come back tomorrow night for the final Croatia V France, we were taking a selfie when we realise we are on the big screen as there is a TV camera guy filming people in front of the main stage area, Dave gets a photo quickly before he moves onto someone else. We spotted a couple of vegan restaurants and took photos to send to our son and his partner should they ever visit. 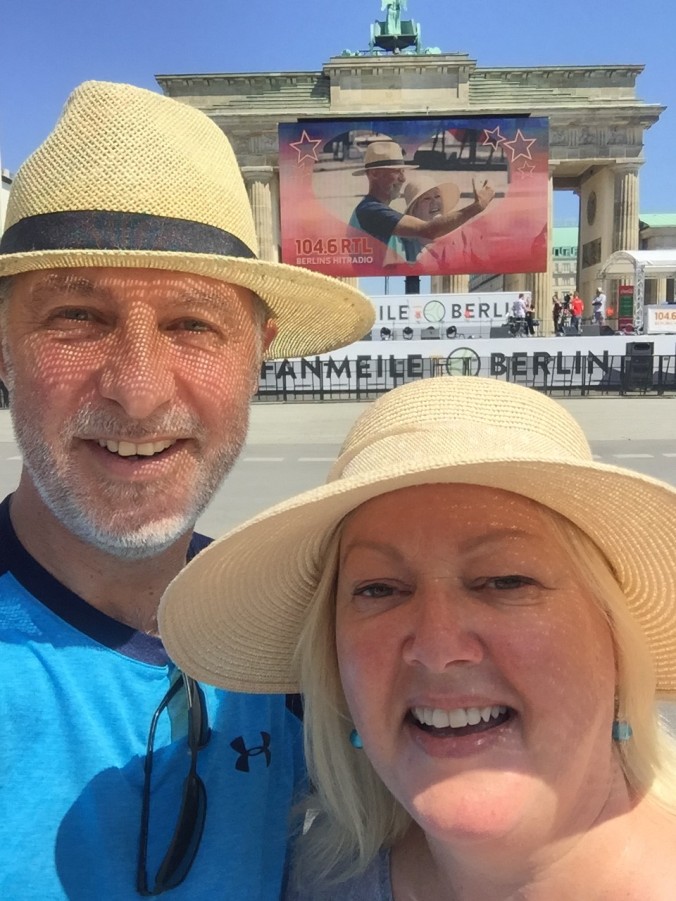 We think it’s great that the city has provided this as it brings all nations together and what can be wrong with that, the gate since the Berlin wall came down has been known as a place of Peace and Unity, hundreds of thousands of people celebrated the fall of the wall at the gate in 1989 and at New Year over 1,000,000 people celebrate at this area.

We visit next the European memorial to Jews – Murdered Jews of Europe, also known as the Holocaust Memorial, established to honour all Jews of Europe, up to 6 million who perished as a result of the Holocaust, 2,711 concrete slabs or varying sizes and heights opened on 10th May 2005, it is forbidden to stand on or jump on the slabs but there are always people who don’t engage their brain when visiting these places, one group of lads it seemed on a stag do really wound me up they were shouting and swearing and I had to walk away from them in case I spoke before engaging my own brain! The memorial has a subterranean information centre, but we didn’t find this out until afterwards, I’m really sorry I missed that.

Dave says let’s have a sit down in the shade as it’s a hot day and that is fine by me as I’m a bit knackered now to be honest! We are walking a lot, but it isn’t just that, it’s the brain overload, as I’ve said Dave has the map, although I’ve looked at it and know roughly were we are going he takes me left, right, left, ok where are we stopping I ask?  this one looks nice? No let’s go a bit further towards our next stop The Topography of Terror and find a place there, OK how far is that? 5 minutes? because I’m thirsty? 10 minutes he says, after 20 minutes he gets ‘’The Look!’’  just around this corner says Mr Emms, I tell him that may have worked on the kids 20 years ago and I’m not a happy bunny! We reach our destination and of course no bar or café  just a Currywurst place in full sun! we’ve been out and about now for 6 hours and I tell Dave there is no way I am going to read about Hitlers’ rise to power and the dreadful mass murder without a bite to eat and a cool drink,  the irony didn’t escape me, I stomp forwards into a shady side street and find Johnny’s bar, it has a TV on and the 3rd place world cup game is just starting with England against Belgium, it’s cool inside there is draught beer and within 5 minutes we have two Pils and a bowl of Nachos with hot Jalepenos, he’s off the hook now!

Johnny’s bar near the Topography of terror

After 2 hours of relaxing watching the football, we lost! We muster the stamina to visit first the outdoors exhibition of The Topography of Terror, this is a placard based outdoor area with parts of the wall showing bullet holes all along, your imagination can do the rest? It choreographed Hitlers rise to power, see below extracted from the museum, unbelievable how fast he managed his climb from becoming Chancellor in Jan 1933 to having absolute and total power under the ‘’Nazi state’’ dictatorship within 20 months.

Walking into the museum opposite there are televisions and computers for interactive use set up at desks, huge wall placards, no piece of horror of Nazi occupation and Hitlers reign was spared, we couldn’t possibly read it all and the place was huge, we think you would need half a day alone to see and read all of the information, we walked about separately picking out the pieces that caught our eye, drawn to any graphic images, we left the museum walking out into the warmth of evening and the fading sunshine and still we said ‘’how did it happen’’? ‘’how did he convince a proud nation to follow him’’ the rest of the world initially too busy fighting WW11 to give the alienation of the Jews the attention it merited and when they did it was too late for millions of everyday ordinary people and families just like you and me, especially targeted were the most intelligent and professionally qualified Jews, firstly humiliated in the streets made to stand with placards naming them as traitors for hours on end for all to stare, teachers who refused to make their pupils swear allegiance to Hitler, doctors found treating Jews all made to walk the streets with their family names and profession and home address written on large boards hung around their necks, eventually their suffering to end in the most inhumane of circumstances.

We were exhausted but commented that we have no real idea of hunger, thirst or exhaustion, however all things being relative we made our way back to Pogo to enjoy the last fragments of sun with a glass of wine, reflective conversations ensued.

2 thoughts on “An educational day in Berlin”