Crossing into Slovakia late afternoon yesterday we headed for another park4night find, on the way we saw fields and fields of sunflowers lining both sides of the roads for a few miles. 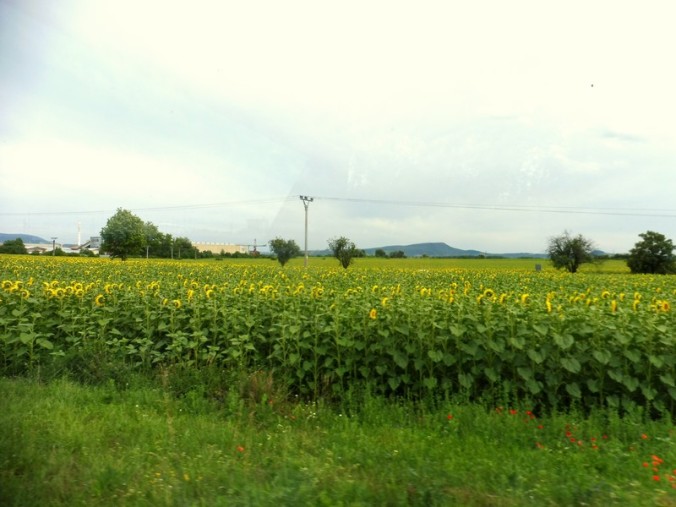 It was a sight to gladden the heart until we were pulled over by the policeman we had just passed parked in a layby on the Slovakian toll road, the policemen comes over to Daves’ window, Dave opens the door and he asks for his documents, we think he was checking for the vehicle weight, we would have come up on the Electronic system as we had bought an E vignette, Pogos V5 says he’s 3,500 kg, he weighs more than that laden up but it’s what is on the registration docs that matters.

Good job Dave bought ours on line 2 days ago!

It was just a car park with a skateboard park at one side and a single building that is a restaurant at the other side looking over a tributary of the Danube – River Vah. (GPS N47.760267 E018.141988) We popped in to the restaurant and had some late lunch/dinner macaroni with smoked bacon for Dave and lamb steak with a sweet caramelised saurkraut for me, both delicious, one white wine and 1 pint of darker than normal beer for Dave, all for €17 or £15.

one for you Degs, big boy beer!

Back to Pogo and chilling with a cup of tea and a knock on the side of pogo? Open window and there’s a guy stood there with a few teeth missing pointing to his wrist where his watch should be, whats he saying? Speaking Hungarian he keeps pointing at his wrist, we know there’s no charge for this car park, Dave was just going to shut the window but I gave him €2 and off he went quite happy, hopefully he wont bring his mates back. the night fishermen arrived and off to bed we go.

I didn’t sleep that well though, the wind was rocking the van a little and we were directly in front of the river, doesn’t matter how many chocks and wooden blocks Mr Emms uses I’m still occasionally nervous.

Next morning, Sunday 24th June we set off towards the Northern Slovakia, it seems that most of what we want to see is in the more northerly areas, mountains and walking trails and National parks, we opted for a riverside free pitch at Tlmace next to the River Hron, (GPS N48.289201 E018.527142) the reviews said there were permanent campers and they were correct mostly caravans and tents, there was just one other tourist a French motorhome, mostly Romany gypsies we think, they seem like nice folks, living and fishing by the river, we didn’t see any rubbish at all and had a peaceful night. Mr D chicken curry for tea, Dave’s excited as I mostly cook veggie food in Pogo because it’s easy and cleaner but also to get the budget back on track, risottos, lentil curries, minestrone chunky soups and spicy vegetable and bean chillis’ or tuna tarragon and tomato spaghetti are our regulars, then when we eat out we have fish or meat, just as well we like beans! 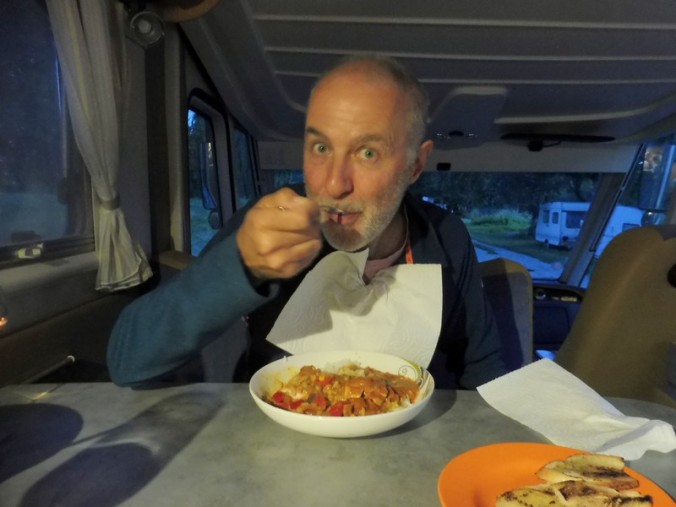 Blue Peter biscuits, much too nice!

Dave went for a walk  and reported that all along the way there were more ”residents” no-one seems to mind and all the grass is cut nearby, by whom we don’t know but it was such a peaceful place to stop.

We watched a French DVD box set loaned to us by my brother “Spiral” it’s not bad so far.