(sorry this blog should been posted before the world cup football one, we’ve got gremlins!)

Another good nights sleep here at Lake Balaton free spot, we are so far behind with our blog that we decide to make a concerted effort to get a few blogs done whilst we are enjoying the views of the lake, undisturbed, quiet with a bit of shade.

Our Mi-Fi data on our 3 mobile SIM in Pogo ran out two days ago. Cathy had called O2 as she had also had some charges on her phone bill that she thought were wrong for calls made whilst in Montenegro to her sister, she knew she had made them on WhatsApp over wi-fi, it turns out that she’s correct and they credited the charge and give her 500 mb data for free. I had topped up our motorhome Mi-Fi SIM 2 days ago for £15 for 3GB for 30 days, I think it’s expensive but we have little choice. We have two SIM’s and we alternate them each month, 3 mobile doesn’t like the continuous use of the same SIM each month. Suddenly the data runs out! after Cathys good outcome, I decided to have a live chat with 3 mobile, it’s far better than numerous emails and texts, we have used this method a number of times now whilst not in the UK (using my phones data allowance).  Long story short is I said I’m not topping up any more with 3, customer services gets on line and next thing I have 7GB free! 30 days to use it, Cathy admits later that she may have watched videos on YouTube, oh well we’ve got it now anyway, naughty Mrs Emms.

This afternoon we are moving to Siófok approx 50kms north but still on the same side of the Lake.

Last night I put 50 litres of fresh water in our tank from the drinking water tap in the park, it would be a bit cheeky to put our hose pipe on the tap, the easiest way is to use our 10 litre watering can. We do this on sites when we don’t want to move the van.

We arrived in Siófok at a car park we found on park4night at a bar near the lakes edge, just a few bar goers and folks using the lake here, no signs at all about parking, I manage to reverse in so Pogos rear is over the grass, this means we take up the same space in length as a car would. It’s a great spot as we can see the sun set and shoreline from here.

We fancied some World Cup footy so we go in search of a TV in a bar, well it’s not like Croatia where there is always a TV with sport on, the Croats love sport, after asking at 2 bars we went inland a little and Cathy sniffed out a bar with the football on, this will do nicely! 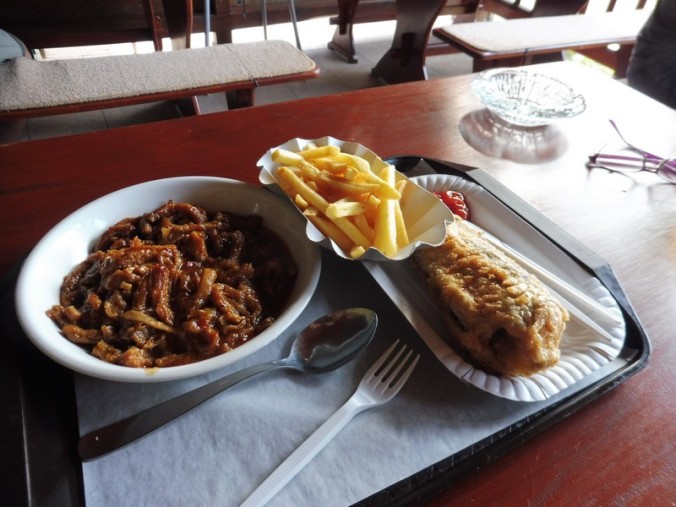 Cathy thought they were onions! it was tripe yuk!

There’s a cafeteria with the dishes on display and Cathy comes back with a whole fish in a light batter for herself and a beef stew for me. Urgghh! what’s that I said after one mouthful, it’s not very nice! it was full of slimey fatty pieces, Cathy took it back and with her smile exchanged it for pork with sauerkraut without any problem after learning that the description had been lost in translation, it was beef belly or tripe as it’s known, Germany lose to Mexico 0-1, that’s a shock.

As we walk back we see many people swimming, how shallow is it here? the swimmers are 50 metres from the edge and the water is only at waist height. Others are sunbathing, fishing, cycling and running. 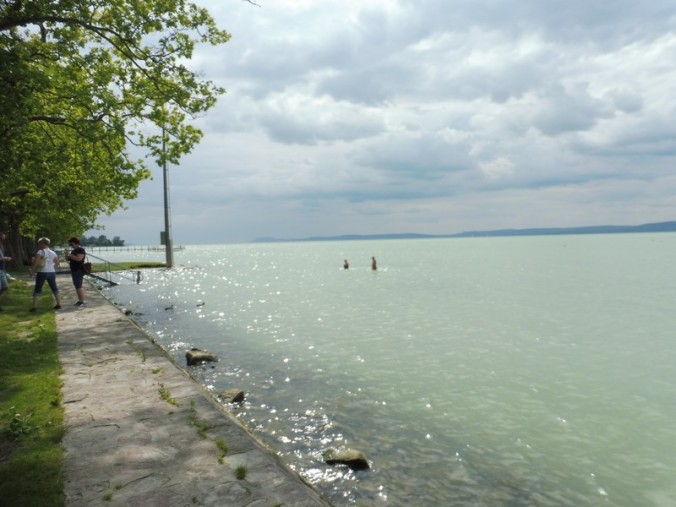 We sit at the edge of this huge lake in the evening sun, enjoying our time here, as the evening cools it becomes comfortable (for us!). Cathy sees a fisherman landing a large fish and goes over to see if she can take a photo,  she inadvertently stepped on to his rod! no damage done thankfully.

The night sky is lit with bright stars and as we gaze upwards the crescent-shaped moon slowly disappears behind clouds. How lucky are we, right here, right now? we keep asking ourselves this and we don’t take it for granted being this fortunate at this time in our lives.

We woke to strong gusty winds whipping across the lake forming many waves and white turf it difficult to believe this is a freshwater lake, it looks like a surf beach in Cornwall.

Now we understand the warning system that we saw in the museum, prior to this system there have been several tragedies on the Lake the most commonly spoken about being the steam boat Pajtás, nicknamed the ”Titanic of Lake Balaton”.

Pajtás was a steam-powered passenger ship manufactured in 1918, by Schlick-Nicholson shipyard in Budapest. It was designed to carry passengers on the Danube but later it was commissioned to Lake Balaton with a lot of modifications (e.g. expanding capacity from 150 to 200), but without any official stability test or approval.

On 30 May 1954 a lot of people were celebrating children’s day. Pajtás was starting from Balatonfured to Siofok with 178 passengers. Shortly after departure, the ship tilted to port then starboard, the captain tried to restore stability but the third tilt (again to port) was deadly, and the ship capsized. The steam was emergency released by the boiler room operator, which cost him his life but prevented more casualties by explosion of the boiler.

The exact number of casualties is still a matter of discussion, the official report by communist newspapers counted 12 people. The list made by survivors on the 45th anniversary of the sinking counted 23 names. One witness said, he counted 43 bodies after the accident, there is a statue to commemorate the sinking. 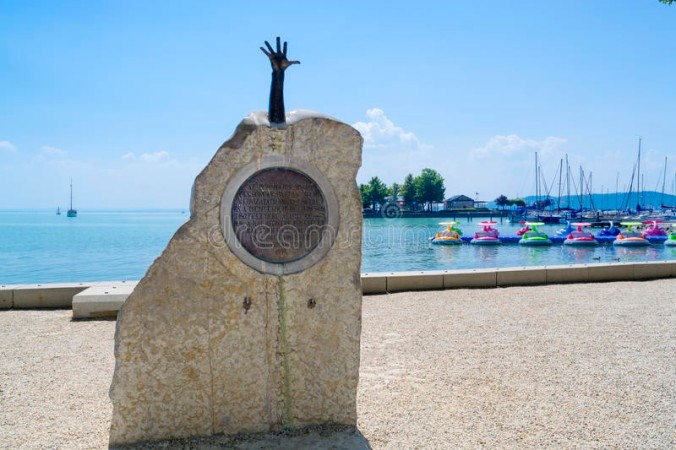 Cathy is not taking that morning swim now but it didn’t stop some lads getting in and having fun, we could hear their squeals carried across to Pogo on the wind.

2 thoughts on “It’s a load of tripe!-Hungary”