Yesterday we camped at Camping Kod Boce, it was a washing kind of day, Dave volunteers!  even better, there is a washing machine for €5 so we pack it full! Our clothes were soggy after being caught in the downpour at the Black Lake, this morning we have decided to leave here and head for the Tara Bridge near the Serbian border, here we hope to go zip-lining and we arrive 22kms later after a very steep descent through alpine looking meadows scattered with farm buildings and the odd cow at the bus stop! 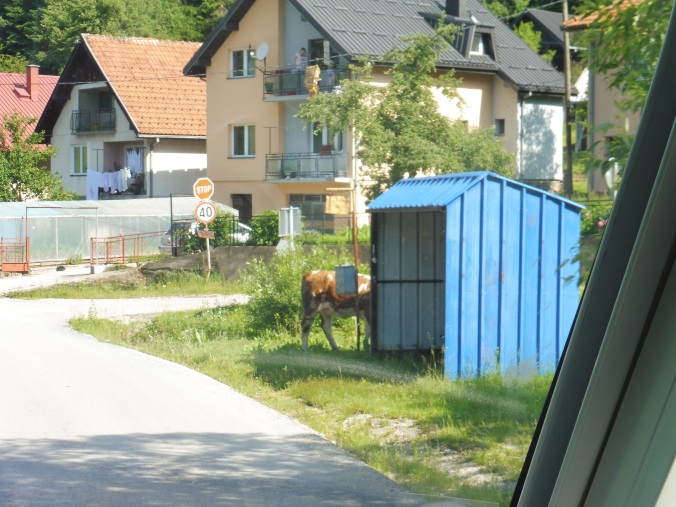 Arriving at Tara bridge it’s €5 parking or the attendant says we can buy a coffee in the hotel restaurant and park for free, oh good, don’t need much of an excuse for a coffee and so far it’s the best we have had! She says only the yellow zip line is working? this is the best one? really, I think as there are three zip lines, red (small), yellow (medium) and green which is the longest at 1050 metres and is the highest. I look at the green zip line company in the little hut and get the girls attention, yes they are open and they are the largest and highest in Europe, the yellow zip-lining woman was touting for business it seems. We agree to go for €20 each for a dual ride. They take us in an old VW minibus to the starting point across the other side of the river, high up in the forest, we give the young lady our camera to take our photo. 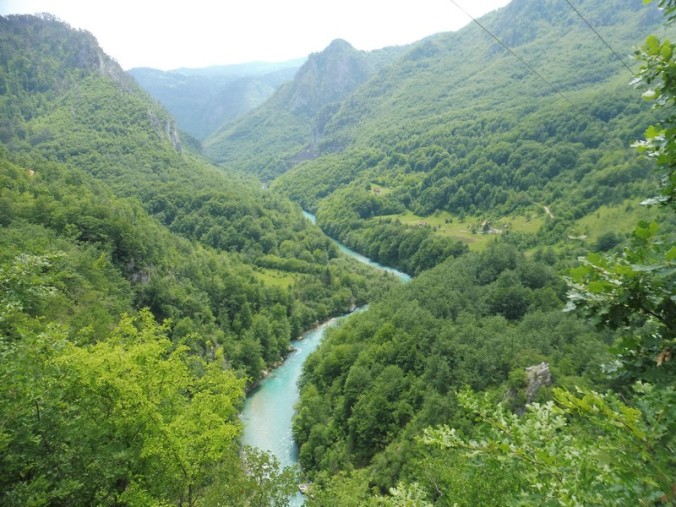 the other side of the Tara bridge from our Zip Line 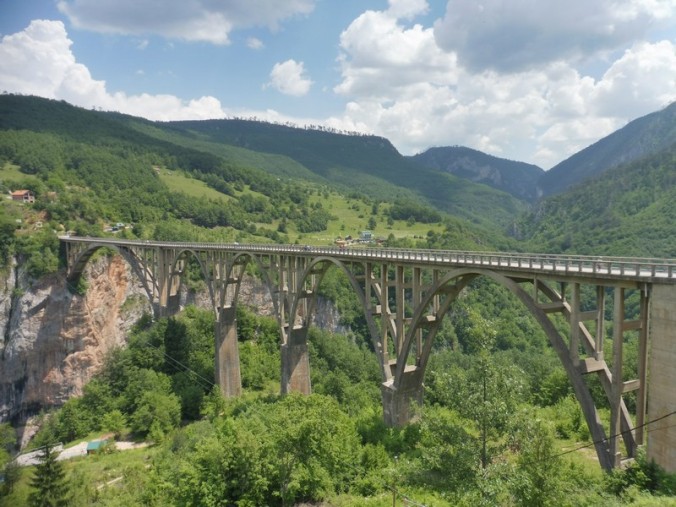 Harness on, how much do you weigh? urmm? Only one instruction given, put your feet up at the end , who wants to go first? 80-100 Kilometres per hour, it was so fast!. I really wasn’t expecting the speed at which we would be flying! 1050 metres long and a gradient drop of 150 metres, it literally took my breath away, the wind it produced threatening to blow my sunglasses off my face! I’m not letting go to hold them in place though, I felt quite scared for about 1 minute but then relaxed and looked down at the river, which looked like a blue streak far down below me, landing on the jetty I was just in time to see Dave coming in behind me, he told me afterwards that he let me go first as he was having second thoughts, but he absolutely loved it, the mix of fear and exhilaration was like a drug. The bumpy road back in the 4×4 old Land-Rover was a bit of a bone shaker, two of the staff sat on the roof, Dave commented that everything goes in Montenegro, they don’t sweat the small stuff here!

In the past zip lines were used to transport goods across the ravines to remote places before some roads were constructed and this method is still used in parts of China.

The Tara canyon is 1333m deep, which makes it the deepest in Europe and the second deepest in the world after the canyon of the Colarado river, the largest part of the Tara river including the canyon is part of the Durmitor National Park and is under the protection of UNESCO.

Arriving back at Tara bridge we admired its pink arches and spanning structure, it is 172 metres high and 365 metres wide built between 1937 and 1940, When completed, it was the biggest vehicular concrete arch bridge in Europe. When much of Montenegro was occupied by the Italians during the WW11 German led invasion of Yugoslavia, Italian forces took control of the bridge during an Italian offensive in 1942 , with the aid of the bridge engineer Lazar Jaukovic a Yugoslav partisan party blew up the Central arch of his beautiful bridge halting the Italian advance, Lazar was later executed on the remains of the bridge by the the Italians, events of which were depicted in the 1969 Yugoslav film Most, a plaque in the engineers honour stands next to the bridge today, the bridge was also used in the 1978 British action film Force 10 from Navarone set during World War II.

We walk along the bridge and take a selfie. 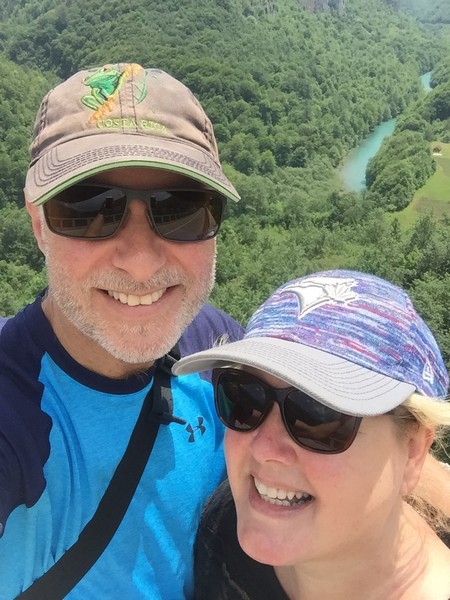 Now it’s time to drive to Serbia! there are 6 recognised crossings  and we go from Bijelo Polje in Montenegro to Prijepolje in Serbia.

Anything to declare they asked at the border, er, no, well actually we didn’t even know what should be declared, passports and paperwork checked and we are waved through, simples, a bit easier as our insurance already covers us, an International Driving Permit is recommended, but not a legal requirement. We had chosen a site via en-camping.info,Camping Zlatar near Uvac National Park, arriving at a lovely house in a small village outside Nova Varos, we are directed over a very neat garden and through a gate by Nada, she was so lovely with the biggest welcoming smile I have ever seen, she invited us in to her big farmhouse style kitchen, out comes the Rakija, a plum brandy and would we like a coffee? we struggled to communicate, out comes her laptop and we communicated through a translator page.

The thunderstorm appeared from nowhere and as we were parking up earlier an extremely loud thunder-clap had made Dave duck and dive as he was putting the ramps under the wheels, there had been no warning rumbles and he later told me he thought we were under fire  and being shot at! The wi-fi went off so we looked through her visitor book and she said her son would be here tomorrow, her son Branco speaks english.

For such a sweet peaceful location it was a noisy night, with a dog barking for most part.

Dave’s so frustrated by his iPhone 6 it will not connect to wi-fi ever! 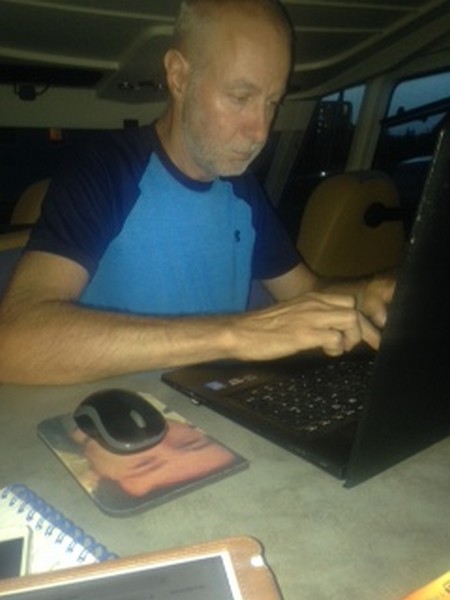 We are so far behind with the blog as we need wi-fi to upload the photo’s ah well, red wine and another couple of episodes of Outlander it is then. 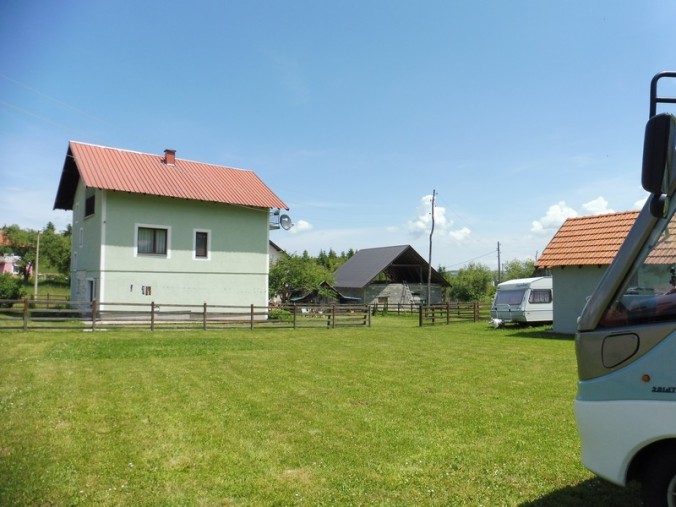 PS – we have uploaded some new videos onto yesterdays blog as we couldn’t get them to upload properly yesterday so if you’ve already read it then take another look.