Up at 6am wide awake as we had gone to bed early the night before, I made a cup of tea and sat outside on the bench in front of Pogo and watched the light changing on the River Moselle as the day began to break, I had a good feeling today was going to be a nice day.

Morning coffee, it’s going to be a good day

Left the free Aire (with services) at Millery near Nancy this morning, we bought a baguette from the mobile bread van who came to the Aire. There was a small road nearby but it wasn’t a problem with ear plugs in and the church bells stopped ringing at 11pm.

Drove to Ribeauville in the Alsace region through our first mountain pass  Col De Sainte Marie, we peaked at 742 metres above sea level, very steep gradients up to 10% in places on both sides of the mountain, Pogo was miffed a bit and started overheating, not dangerously so but we put the cab heater on full and opened the windows, that seemed to do the trick!

Once we had come down on the other side we pulled in at a supermarket, time to buy supplies, lots of lovely salad and fresh meat , we bought a tin opener! It was €5.75! but we needed one.

On towards the Aire at Ribeauville next to a wine Cave – Cave de Ribeauville, we found the exact spot but now it was a building site. Dave went inside the wine company offices to ask about the Aire and was advised to go the Tourist Information office just a short walk away. Dave came back with information about a new Aire located up the pass slightly, the way we had driven, it was an old campsite it seems as the areas  for tents were still numbered it was in the shade of a large rock and away from the road so it was quiet, it took us about 7 mins to walk into Ribeauville, can’t beat that!

Were all alone for now but we saw lots of other motorhomes going to the same closed Aire as we had done so it won’t be long before others arrive, Dave parked up after putting planks down under the drive wheels to make sure we don’t sink in to the grass. The ticket machine was broken so it looks like it will be a free stopover here tonight! Waahay!

The town really made an effort for Easter

Château de Saint-Ulrich – up the hill! 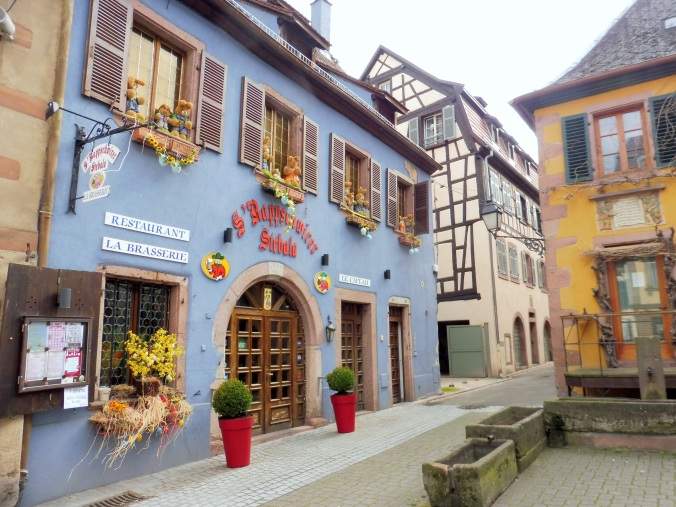 zoom in to see the teddy bears!

Dave spotted a Stork on the roof of a building, he gets excited when he sees birds! And the camera was soon out! 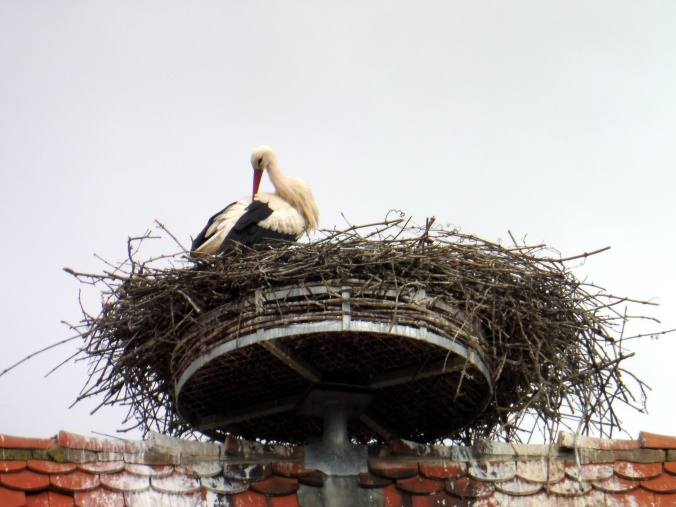 On one of the roofs in the centre of the village

We are in need of supplies so when a nice young man invited us into his Fromagerie to taste some cheese we thought why not? We tasted a couple and liked one which was reminiscent of Comte but a bit more fruity so we bought some, I pointed to where I wanted the cheese wire to go but he doubled it! I didn’t say anything as I thought oh well it won’t be going to waste, next was the sausage, we tried a couple but settled on the smoked one, dried hung and matured Saucisse Fumee ….. it was really delicious so we said we’d buy it and I asked him how much it was, he pointed to the scales and I saw 4.6, he duly wrapped it all up nicely in lots of fancy paper and then told us how much it was….. It turned out that my saucisse was in fact 0.46 kg and €25 !!!!  lesson learned Cathy, wear your glasses when buying stuff!

We got back to the van and sampled the bank busting Sausage with the lovely cheese and some olives and crackers and it was delicious, erm was it worth €25 of course! at 2mm slices x 2 each hahahaha!.