We sat outside on the camp site picnic benches (at Camping Stogi, Gdańsk, GPS N54.370371,E18.730261) under the parasols for breakfast this morning and we are sure we felt the bitey things nibbling at us, we persevered but noooo I can’t stand it and go inside!

Today in Gdańsk we have planned to use our time effectively and visit a small number of the many recommended places, including the Solidarity Museum, St Mary’s Basilica, Mariaka Street and parts of the old town. Cathy has always wanted to go to the Solidarity museum here in Gdańsk and its part of the reason for the trip here, we make our way there on the tram direct from the camp site, tram No.8 drops you right outside the Solidarity museum and you can’t miss it!

Its exterior is made from rusty coloured sheet metal and looks like a ships hull, and in front a very tall monument dedicated to the 45 Fallen Shipyard Workers from 1970, shot dead by the police, the three crosses at the top represent faith hope and love. It stands 42 metres high and weighs 139 tonne, it certainly catches your eye as you walk across the open space towards the entrance.

What a place it is, the foyer as you enter is glass, chrome rails, brown metal rust coloured walls and the greenery from the trees and fauna is unusual and fascinating, as the bright daylight floods through filling the vacuous parts of the building. There is an air of calmness and tranquility. We are in awe from the moment we entered, and we have a coffee and quietly admire what we see and to take it all in, Cathy says that the open airy feeling downstairs in the foyer area is in total contrast to the oppression which we will visit in the museum upstairs.

Foyer of the Solidarity Museum

It’s time to explore and we pick up our very high-tech audio guides after paying our 40zl admission and the staff directed us to the starting position in room A. The small handheld audio guide has a picture display of where you need to be and then it automatically plays as you walk through at your own pace it connects to the display material and explains it in an informative way, the pause function is helpful when you want to talk and chat about what we are seeing, it’s an amazing piece of equipment, easy to use and follow.

It is the story of the Solidarity or Solidarność movement presented in a variety of ways, including audio guides, interview recordings, TV news transmissions, photos, paperwork, documents, videos, facts, numbers, dates and a lot of other information. The museum layout, the audio system and visuals combine to be the best museum guide system we have ever seen, we were very impressed.

Lech Walesa worked as an electrician at the Lenin shipyard here in Gdańsk and in August 1980 after another rise in food prices the mood was one of discontent, he led a non-violent strike. This action led to other similar strikes across the region in as many as 20 other plants and factories. This momentum created Solidarność, the solidarity movement, membership quickly grew to 10 million, a quarter of the Polish population and became the Soviet bloc’s first independent trade union. Lech Walesa always spoke about resolution of disagreements through dialogue and discussions, little did he or anyone else know or realise what was to follow in Poland and in other communist countries.

Martial law was imposed by General Jaruzelski, communist party leader and prime minister at midnight on 13 Dec 1981, the aim was to crush Solidarność.

In the 1980’s the communist government agreed to give Polish people more rights and freedoms, Solidarność later became a political party with Lech Walesa its leader and he became the Poland’s president in 1990. The party helped to end communism in Poland and created a democratic Poland, there were other Eastern Bloc countries such as East Germany who also wanted to be free from the grip of communism.

John Paul II visited his homeland in 1979 and gave hope and inspiration to the people of Poland.

The world map began changing once more, we have a lot to thank Lech Walesa and his Solidarność party and the bravery and determination of the Polish people for.

Eastern bloc occupied countries before the end of communist rule

It all started to decompose in Poland

Sometimes we take our freedom for granted, visiting the museum has made me appreciate how fortunate we are. For example, in the museum there was a document that caught my eye, it was an application for a wedding of two young people, nothing unusual in that normally but this application meant that a crowd would be gathering at the celebrations and this was not allowed without the states agreement, communism rules meant it was forbidden to have a gathering of people without prior permission from the state-run authorities, not much freedom at all really. The state didn’t want any type of crowds forming under any circumstances! This is one of many examples of the communism system back then in Poland.

We highly recommend a visit to this museum, it’s one of the best we have ever seen, a fair entrance price, high level of information with visual and sound, amazing 3D, very well laid out over several floors, an interesting & modern structure, its architecture, exhibits from the shipyard & factory floor gave a real feeling of the workers lives and their struggles under communist rule.

We went up onto the roof of the museum for a great view over the old shipyards, and red brick buildings which housed the former workers and strikers, these building are mostly used for music venues now and an art museum is housed in one of them, there is Yacht shipyard with boats designed for Gulf Arab Sheiks and eastern Oligarchs, new apartments are being built and a shopping centre is proposed.

View from rooftop over the old shipyard

We didn’t realise that we had been there nearly 4 hours as we sat outside beside the fountains in the sun and enjoyed a quiet 10 mins thinking and reflecting on what we had seen. 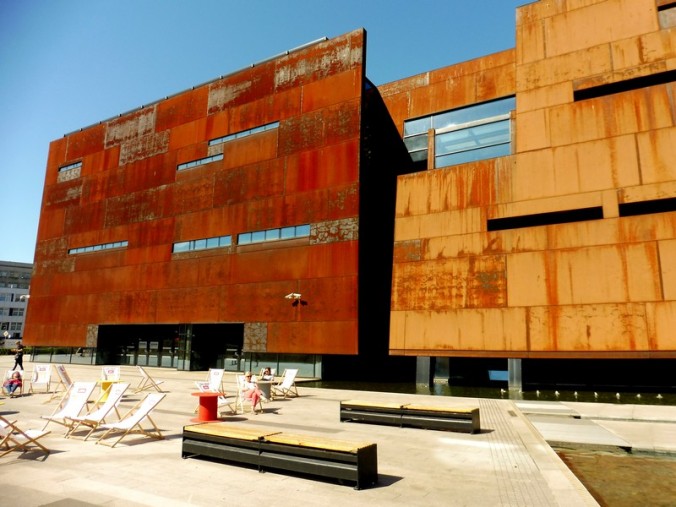 We made our way back in the old town of Gdańsk to find and visit St Marys Basilica, unfortunately for us it is in the throes of being renovated, there wasn’t anything to see, all the walls were stripped bare, as the church’s artefacts and contents were in safely tucked away in storage.

The old town square also known as Market street was 90% destroyed during WW11 and from old black and white paintings and drawings it has been restored to it’s former glory, beautiful tall slim buildings with pastel facades reminding us a little of Amsterdam.

Mariaka Street was our next place, here the tables and stalls on the street are brought up from the basements and shops all selling handmade and unique products with amber, musicians playing violins and people enjoying drinks on the cobbled street.

On the way back, we noticed the distinct differences between the beautiful old town buildings, the new apartment blocks going up and the bleak communist style homes on the outskirts of the city all square boxes each one with a number painted on the side as if it’s occupants were being labelled. 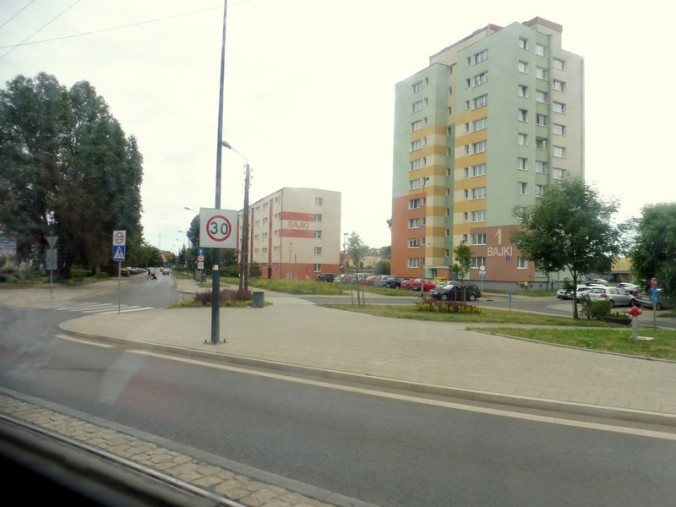 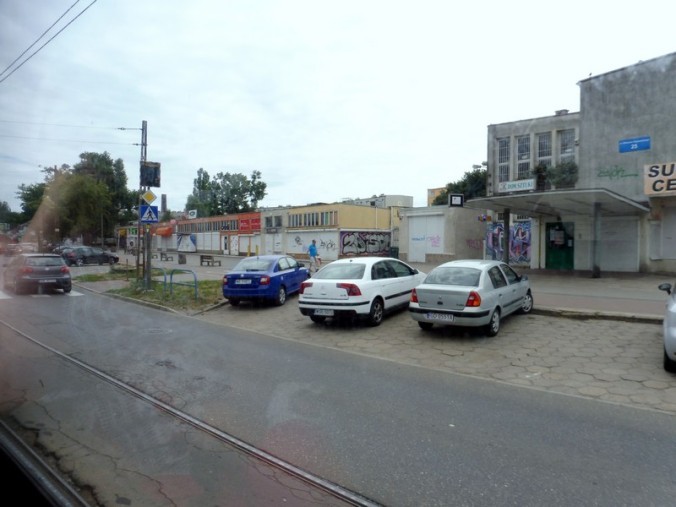 Poor roads and local shops to the camp site

We got back about 7pm and we wanted to go on to the beach here at Stogi, we walked through a typical seaside area, buckets, spades, beachwear, footballs, deckchairs, ice cream candy floss, music, bars. As we walked through the pines and sand dunes it reminded us a little of Freshfield, Formby near Southport, at the National Trust squirrel reserve, the former shipyard and tall cranes in the distance. 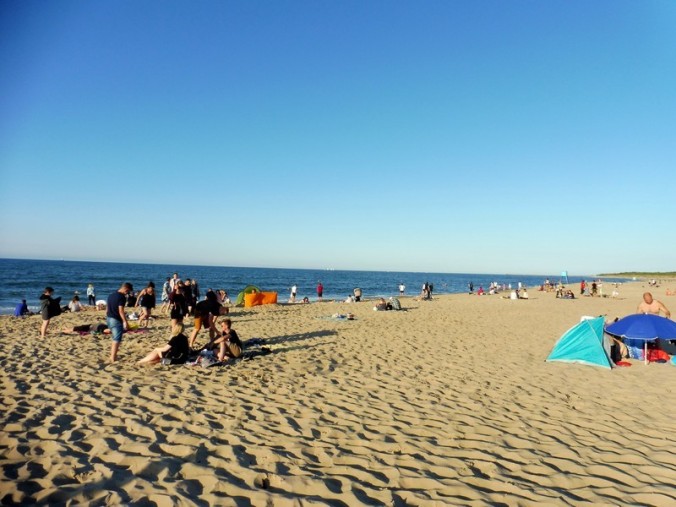 We were impressed with the Beach at Stogi Plaza Gdansk 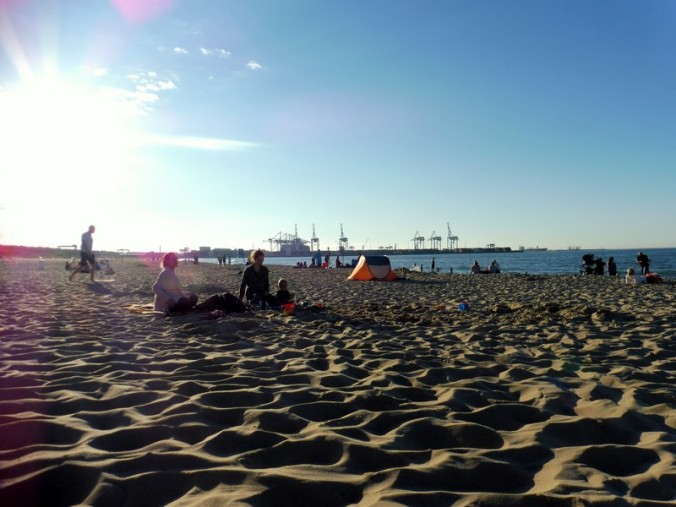 Gdańsk Shipyard in the distance

Gdańsk Beach, could be Formby!

Its amazing to think we are now at the Baltic sea, the last time we were next to the coast was in Montenegro!

As we sat down near the van to research where to go tomorrow we were attacked by the bitey things again, instantly a decision was made, we are leaving tomorrow!

Leaving Kraków we head northwards towards Gdańsk on the Baltic coast, it’s a big old journey at approximately 700 kms, maybe I spoke too soon yesterday when I said we needed a day or two of nothingness! We are going to have at least 2 overnight stops before we get there. It is with mixed feelings that we left Krakow END_OF_DOCUMENT_TOKEN_TO_BE_REPLACED