We left the camp this morning near the Lower Tatras which has been our home for the last 5 nights it’s very breezy but there’s lots of activity, the chickens are clucking, the gardeners are gardening, setting off east to Spis Castle, we stocked up Pogo’s cupboards at a Tesco shortly after leaving, there are lots of Tesco’s in Slovakia and this one was just like home, it feels strange to see familiar labels and familiar sizes on clothes and brands of food that we’re used to, cupboards full to bursting we got on to the 72 road, it was awful! Bumping along we go, Pogos contents rattling, crash! What was that? Jumping out of my seat to investigate and generally bumping along to the back I discovered I’d left the cutlery drawer open, everything was ok, but it gave us a start! Passing lots of pretty ski resorts along the way, Queen blasting out on the radio, Slovakia is the first country we’ve had decent radio connection or a decent channel for English lug holes! normally we have the iPod playing through the radio speakers or we have a pen drive with our music on.

views through our dirty windows

Finally, we get on the only motorway in Slovakia crossing from west to east, the D1 this is much better, and we notice pink bridges everywhere? Why pink? Then I thought why not! 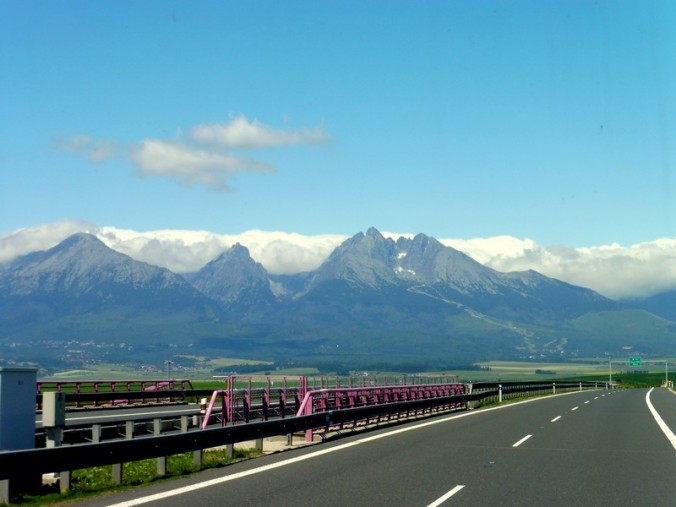 loads of pink bridges in Slovakia

And we finally see them in the distance, The High Tatras looking splendid with their snowy caps popping through the clouds, we reach Spis Castle about 4.30pm, stopped for a bite to eat, I’d like to say it was an interesting lunch, but it was a crisp butty for Dave a raspberry Muller rice pot for me courtesy of Tesco followed by our favourite fruit, nectarines. From our lunch spot we thought we saw a bear?. 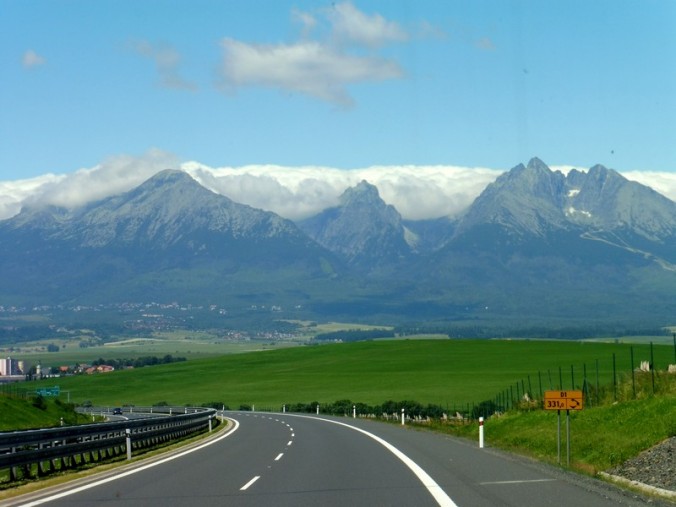 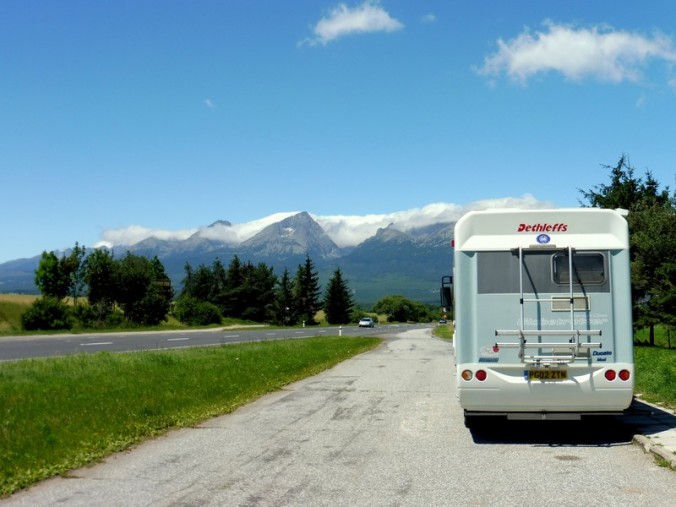 do you see a bear?

The car park attendant at the base of Spis castle guides us into a bay marked M-Bus, there are 2 other small van conversions already parked up, free parking he tells us with a big smile. The view from Pogo of the castle is amazing and I sit a while to just admire it.

This will do nicely

Dave scrambles up the bank behind Pogo to get a photo of the castle with Pogo in his planned resting place for the night.

Pogo gets a good view

Next morning with the sun shining we set off up the hill towards the castle, we’ve read that its €8 per adult, can’t decide whether to go inside, we’ll see how we feel when we get up there, at the top we see a little trail, slightly overgrown and it goes around but down the walls, we take this passing as we go lots of wild flowers, Hollyhock, Lupins, rhubarb and lots of rosemary, I picked a bunch for later, the trail took us around to the back of the castle  and from here there was a great vista over the plains with the High Tatras in the distance and down to the town, looking pretty and colourful with its red roofs, Spis Castle is high and all around us is very flat, its elevation is 634m and the castle is huge , covering 40,426m2 . Its influences are Romanesque, Gothic and renaissance, it was listed as a UNESCO site in 1993 and is said to be the largest in central Europe, its first inhabitants before 1464 were the Kings of Hungary and it gets over 200,000 visitors a year, we discovered that both Dragonheart and The Last Legion were filmed here. 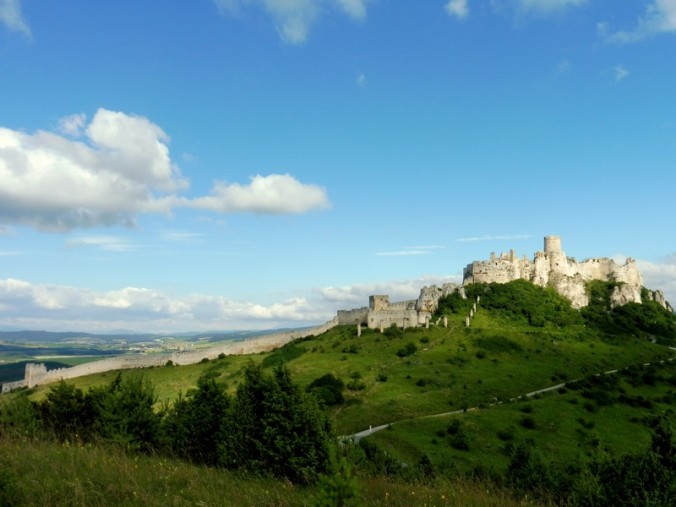 we took a walk around the walls 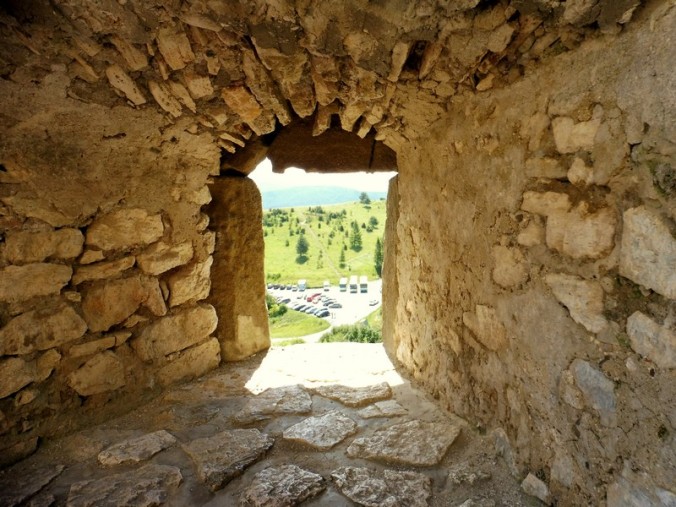 We turned back on ourselves and walked uphill to the main entrance, taking some photos from the courtyard, we decide against going inside opting to save €16, the views from the walls are more or less the same we’ve had for free and although there is a well preserved medieval kitchen we decided we had already enjoyed its best asset being the amazing views last night from our sleeping spot.

Being a Saturday the car park is heaving, we want to get off but Dave’s looking at the sink in the bathroom, it stinks! so I got to work making a vegetarian stew, onions, canned lentils brown and green, a can of what I thought were chick peas but were in fact small white beans, a couple of sad looking potatoes and carrots lounging in the bottom of the fridge box, tinned tomatoes and a good helping of Ras el Hanout spices and garlic, a veggie stock cube, 10 mins to boil up and then into Mr D cookpot we’ll eat that later this evening, I love it when there is a meal already made, especially if we’re tired after travelling.

55kms later we arrived at Vysoke Tatry, Higher Tatras, (N49.167198,E20.270894), it’s a ski resort and there are plenty of summer activities too,  we park in the huge terraced car park for free and pick up a decent wi-fi signal on the laptop only. The winds are so strong Pogo is being knocked about from side to side, 42mph! we got out to look at the ticket system for the cable cars and after 10 mins we were freezing! Stark contrast to just a few weeks ago when we were literally melting in Budapest. Back at Pogo we opened a bottle of wine and relaxed with the spicy veggie stew and watched another episode of Spiral, it’s a bit on the slow side but keeps our interest well enough. 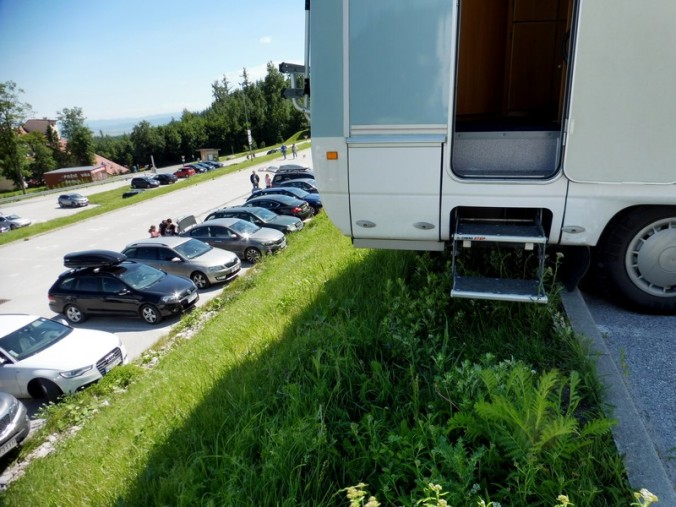 2 thoughts on “Spis Castle and The Higher Tatras- Eastern Slovakia”