Pogo is still parked up in Camping Haller just inside Budapest and today we will take a walking tour of the city, we’ve decided  to do the afternoon one as we enjoyed our night in Budapest just a little too much and getting back late meant we arose late with slightly sore heads, plenty of tea and toast should sort us out also some domestic chores should wake us up a little, those high-tech washing machines are going to get a battering today, nice fresh sheets on the bed for us tonight!

We get the metro into the city it’s just 15-20 minutes and we find the Vorosmarty square where we meet the throngs of people also wanting a ‘’free’’ walking tour, we are split into two large groups, the guide speaks good English and off we go, to be honest the heat was intense today in the high 30’s but the weather app says feels like 37c, and we didn’t fully engage in the tour, the group was large so I was not always able to hear the guide and find a shady spot simultaneously.

We walked to St Stephens Basilica, built in 1905, St Stephen was the first King of Hungary and his mummified right hand is housed in the Basilica should you wish to view it!  Adorned with golden leaves and ruby and pearl bracelets yuk! the story goes that he was buried in 1038 and reburied out of fear that his grave would be disturbed and his hand was removed from the body and taken to the treasury and the man in charge of guarding it stole it and hid it on his estate in the county of Bihar which is today in Romania, it had a few resting places before eventually being bought by Queen Maria Therasa and gifted to her Hungarian subjects, once a year Hungary takes the hand for a walk! each year on August 20th  St Stephens hand leads the parade dedicated to the founder of the Hungarian nation which is St Stephen! 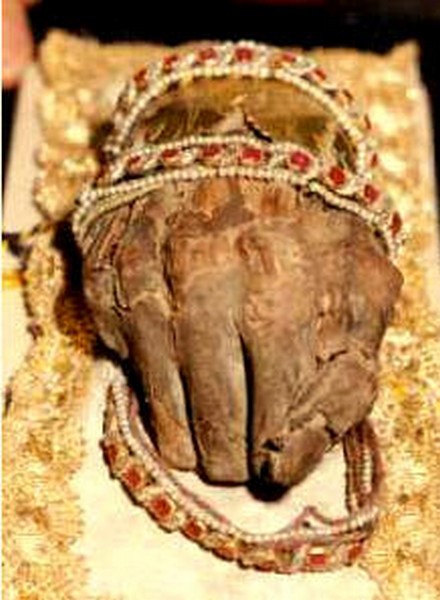 We didn’t go back to see it so sorry for library pics.

We discovered that the Hungarian Academy of Sciences building has produced an impressive 13 Nobel Laureate prizes since 1905, mostly for sciences,  you can take a scenic train ride along the Danube with tram number 2 , 3 of the bridges across the Danube are known by their colour green yellow and blue, we crossed the chain bridge and climbed the many steps to Matthias Church on the hill in Buda, this church has an impressive oriental guilt interior unlike most of the churches in Europe, it’s currently Roman Catholic but has many influences from the Ottomans and has been a mosque around 1541, the Majolica roof tiles are particularly beautiful so bright and colourful, being handmade by the Zsonlay family from Pécs who were famous for their tiles and added at the end of 19th Century, we tried to go in but it was closed at that moment unless you were planning on praying which we weren’t although I did consider praying for rain! Being from the UK I can’t believe I’m even saying that.

The views over Pest from here are truly amazing and the houses of parliament building looks impressive in the late afternoon light, it is possible to book a guided tour of the building but I wonder if the inside will be as impressive at it’s exterior, such a light coloured stone it almost shines.

Houses of Parliament – it’s the 3rd largest in Europe

Square outside Matthias Church on the hill in Buda 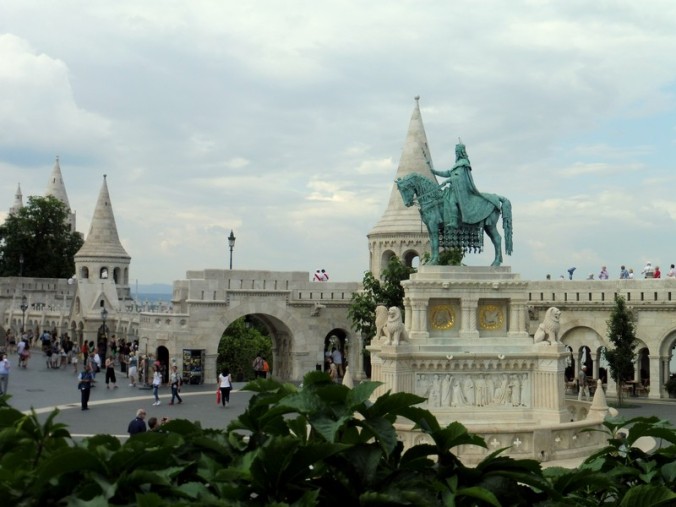 Monument of St. Stephen the 1st

Looking up at the Matthias Church

Matthias Church – we love the tiles!

Tour over and we go to the recommended ‘’ best cake shop in Hungary’’ it’s called Ruszwurm, it’s the oldest café in Buda 200 years old and still family run, we order a fresh lemonade for me Citroen Presse style with lot’s of ice please! I need to cool down as I’m not feeling good far too hot and overheated, beer for Dave and we share a lemon cake. A bit of sugar and feeling better now we make our way back down to Pest, considering having something to eat in the shade but the shade is in the 30’s and I’ve already cooked some chicken so we get the Metro.

The oldest cafe in Buda

Back at Pogo I cook up a pasta dish with gorgonzola and the previously cooked chicken, this was a mistake as we have no shade even with the awning down, we’re melting and grumpy! We ate it quickly and headed to the campsite bar which is fully in the shade and has very cold beer on draught! There is footy on, it’s Russia vs Egypt and the barman wants Russia to win as he has an accumulator bet on, or that’s what we think he said! Salah scores for Egypt on a penalty but Russia win 3-1.

The next morning we are undecided, we really want to see the city but todays’ heat is just as bad as yesterday, we have some shade outside so we sit and write some blogs with the plan to visit tomorrow, there’s nothing wrong with doing nothing but we forget this sometimes, feeling like we should be seeing stuff all the time, Dave gets the electric fan on and puts it on the step outside and it blows warm air on me but at least it’s moving the air about! We manage to publish a few blogs and then get showered ready for the Hungarian music night, this includes 3 course dinner with a drink included for 5,000 HUF each €15 or £13.50

When we arrived at 5.30 pm we were the only ones there! I‘m I hoping more people turn up especially when I’m personally serenaded 3 times in succession!

I bought the musicians a beer each and they moved on to another victim.

We actually really enjoyed their music and put our meal off until later when it cools down more, to start we had a very spicy Goulash soup which was delicious with loads of paprika, followed by smoked paprika chicken kebab and paprika chips are you following the theme? Guess what the dessert was? Paprika ………………… only joking it was rum soaked sponge with chocolate sauce.

Evalena a Swedish lady who lives in Florida joined us after her soup and she finished her meal at our table along with her little dog Buttons, she had some interesting tales to tell and we really enjoyed her company. She gave us a little memento a painted good luck stone which she makes herself.

In the building next door to the camp and adjoining the restaurant is a Serbian music night with dancing, we could go in for €1 but I’m too hot to dance and anyway it looks difficult!

We were later joined by a lovely Austrian couple who were having 5 weeks in their caravan, after that we were joined by an Aussie who was involved in Politics but couldn’t tell us too much about what he did! We stayed up late again and had a few of the Hungarian brandy shots, Palinkas.  This is one of the good things about travelling, not only does the scenery change a lot but so does the company and it’s good to hear other peoples’ take on their journeys and makes us think about how we do things, asking ourselves could we do it differently? And one thing that sticks out is that we used to be up with the lark and out early and to bed early, most folks seem to stick to this way of living and we’ve slipped back into our at home ways, staying up late and getting up late, this definitely doesn’t work when it’s hot and we’ve contributed to our own misery there.

4 thoughts on “Serenaded in Budapest”