We had a restless night near the motorway with a bunch of feral dogs barking for most of the night, even our impressive silicone earplugs didn’t stop the howling reaching our tender ears!

As promised we had coffee and breakfast in the restaurant as we are free camping for a 2nd night, I had the local breakfast which is a basket of assorted breads, honey, peach jam and salty cheese very similar to feta, Dave had a Kastel breakfast and it was huge! I don’t know how he ate it all, a strange combo of frankfurters, fried eggs, gammon, kaymak which is a sort of non-salty cream cheese served like a scoop of ice cream and the feta cheese too, he finished it all and then my bread too! 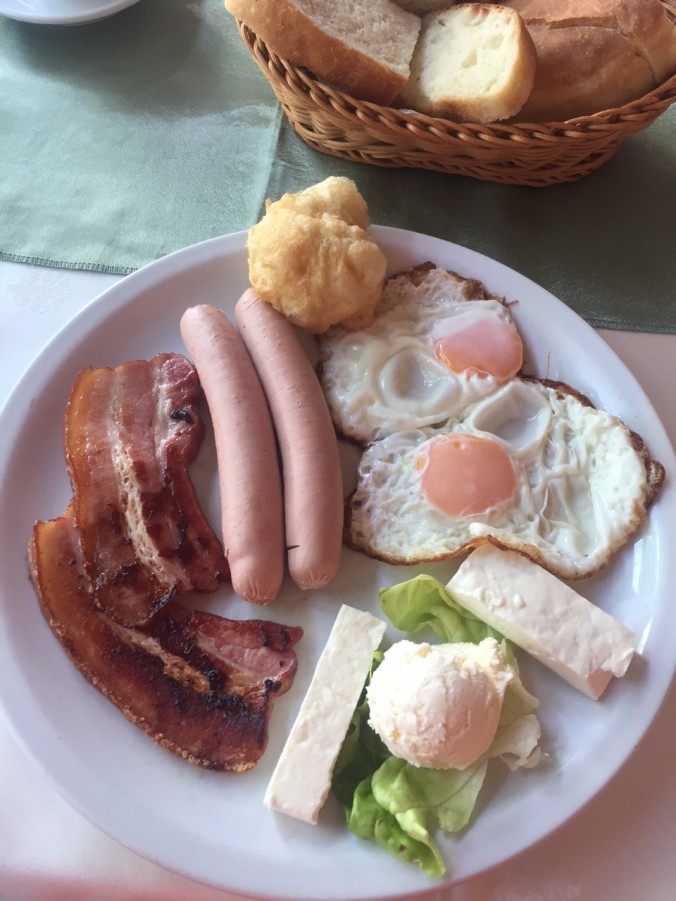 yes they are frankfurters!

The humidity is intense today and we can’t pull the awning out in this free spot so we drive to a lake nearby Slansko Lake, it’s just down the road from the restaurant it has a dam across it  and from our parking spot on the side of a track it looks just like Rivington reservoirs near our home in Bolton, we decide it’s too hot for walking it’s about 35 degrees C, so we turn around in a very tight spot near the dam, I have a meltdown as Dave edges forwards and tries to do a 3 point turn, it needs at least 9 points! I ask him not to go any further forwards towards a drop but he ignores me and Pogos nose is over the edge it seems to me from my seat! I ask him again not to go forward but he does! I panick and although I’m not bothered about heights I’m very afraid of being near an open edge, I ask again NO he says ‘’I’ve got it, it’s fine!’’,  well I’m not a bursting into tears kind of person but that’s exactly what I did, he has to continue now as he’s committed, I dive into the back of Pogo crying, once we are on the straight Dave parks up and apologised, he’s not used to my fear as I don’t normally shy away from anything, I have to tell him it is no different to him having to come down the tower in Split. He promises he won’t do it again, I tell him I don’t care if it’s 333 point turn and people are waiting! Little did I know that wasn’t to be the scariest moment of the day.

Back at the restaurant we sit in the bar and have a nerve soothing beer, we are sweating in the shade it’s now more than 35C but it feels even hotter there is absolutely no breeze,  we get the laptop out and maps to plan the next few days, it starts to rain and almost immediately without warning there is a thunderstorm, a huge thunder-clap and we dive back into Pogo as they start to remove all the cushions and parasols, we sit inside with the windows open and watch the storm feeling the air cool by the second it’s a relief, Montenegro knows how to do storms, it’s very very loud. 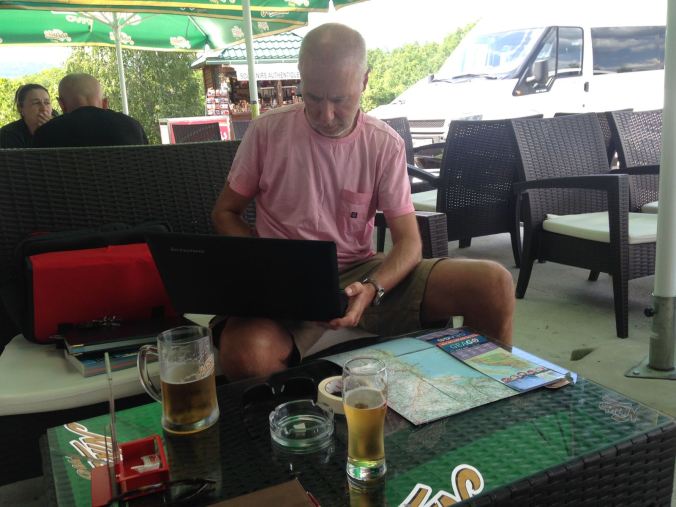 Dave at work, the calm before the storm.

Early evening and we are ready to go into Niksic to watch the footy and the manager orders us a taxi, a lady driver arrives and she’s very chatty, well I can tell you that 10 mins ride was nerve wrecking, she was on the phone in her left hand ‘’want football bar? ‘’ she says, ok ‘’I’ll call my sister’’ this she does with her right hand on a different phone, there are no hands on the steering wheel! We are all over the road and several times we are more than half way into the opposite lane with traffic oncoming she swerves back in time, this happens at least 4 times, Dave looks terrified (I thought about reminding him how I felt this morning but now is not the time) and anyway she suddenly passes the phone to me to talk to the Sister…. It’s a relief that she doesn’t have a phone in her hand now but the driving only improves marginally, the sister says to go to Central Perk bar, it only cost €3.50 but it also cost us a few more grey hairs, she writes her name and phone number down for the return journey, the name begins with the letter D but she says we can call her Darling! Well Darling  we won’t be calling you, thanks anyway. 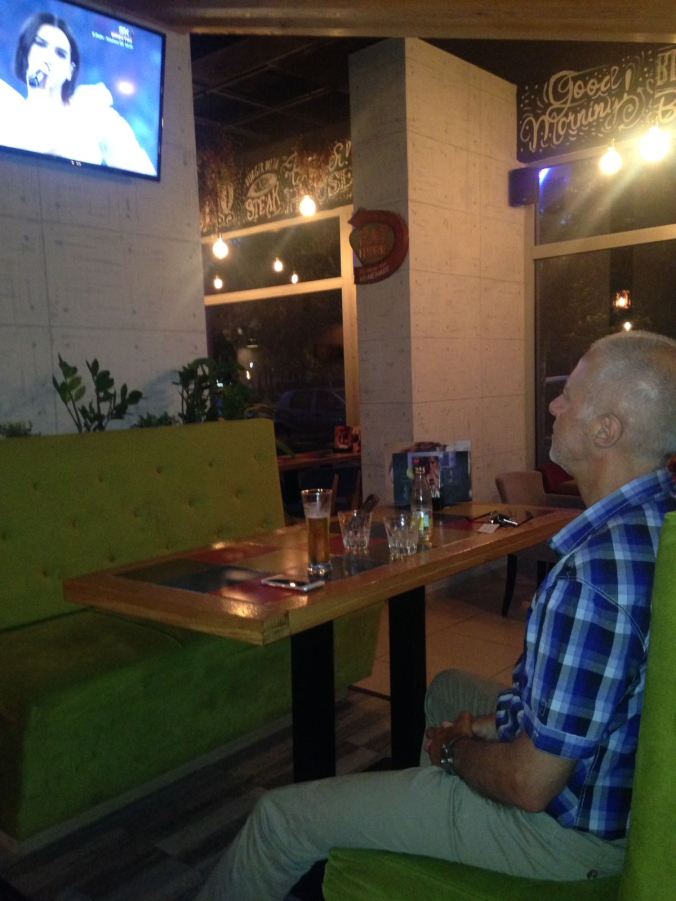 We get a lovely comfy sofa and TV in a booth to ourselves, we order a beer and a vodka tonic, Dave downs his in one, is it thirst or nerves? I remind him how I felt this morning I’m milking it a bit and he apologises again.

The young bar man speaks excellent English and he and Dave had a good chat about football history whilst we wait for the game to start, he had lived in London for a few years and supports Chelsea, oh well someone has to haha! , Next minute he arrives with another vodka and another beer? The owner of the bar sitting over there, he points, would like to buy you a drink as he loves Premier League, we give him the thumbs up, that’s a first getting free drinks for being British, I thank him personally later. The footy is appalling first Salah has to go off due to a terrible tackle by Ramos, we’re gutted for him and if that’s not bad enough , then the goalie, well it’s too embarrassing to describe, rolls the ball to the opposition meaning it for his team-mate, Real Madrid score and it’s all downhill from there.

The taxi back is without fear and arriving back at Kastel Restoran it appears all the oldies (anyone at least a year older than us, or with grey hair as far as I’m concerned) are into party mode the music is loud and they’re doing some sort of line dancing or the Slosh, it was that loud we thought about going in as we wouldn’t sleep over it but opted instead to have another one inside Pogo, the same tune went on and on it sounded like a Wurlitzer on drugs, double speed, it was torture! It was so bad we just kept laughing at it, it’s a good job we hadn’t gone in as we may have had a laughing fit. It finally finished at 1.am and we slept really well, the  extra wine helped – hic!

2 thoughts on “Football in Niksic – Montenegro”