Last night we were at Baško Polje camping for one night, it was just a resting place for us as we’re going to Ploče to catch the car ferry to Trpanj on the Pelješac peninsular, we are heading for Dubrovnik, the ferry runs three times a day off-season, and apparently it’s not summer yet! We find this so strange as the weather is glorious and us Brits are definitely in summer mode!

We decide on the toll road, it’s quick, easy and pretty much deserted, it costs 41kn (€5.60) for 65kms, we arrive with an hour to spare and there’s only a short queue, we have lunch in Pogo and start to write some blog, once we boarded the ferry Dave suggested staying in Pogo and we can write some more blogs, I’m not sure about this, as although I’ve been ok on all the car and passenger ferries so far I’m not sure how I’ll feel without the breeze on my face, I decide to give it a try, so we start writing and Dave’s choosing some photos, after a while I say to Dave, is the ferry late setting off? No? he responds, we’ve been sailing for 20 mins! And I didn’t feel a thing!!  hooray, it’s amazing also that we are using our mi-fi (wifi) in the middle of the sea, we did some research and I found a site at the Dubrovnik end of Pelješac peninsular near to Ston, I called ahead this time to Prapratno Camping and was informed it was only 112kn, €15, £13 without electricity, or we can have electric for another 25kn (€3.38), it’s okay we don’t need it, we have two solar panels and both of them along with the never-ending Croatian sunshine are doing a good job, we manage to charge phones, iPod, laptop, Bose speaker and iPad quite easily, we’ve never dropped below ¼ on our panel, it has most of the time been at ½ to ¾ charge. 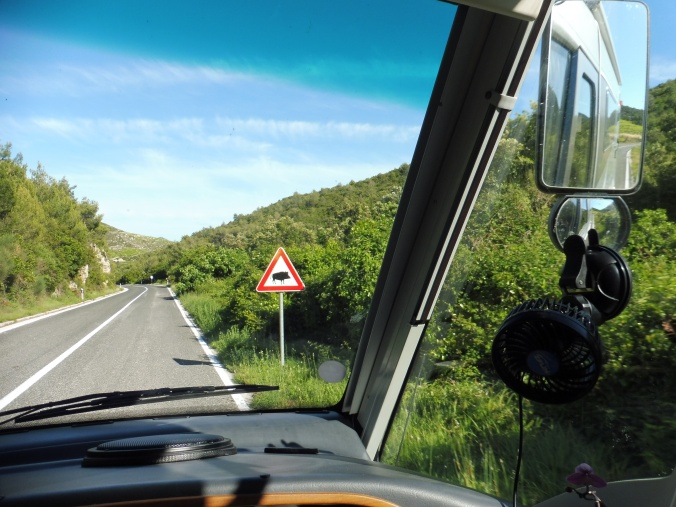 we haven’t seen one yet but the signs are everywhere!

The approach to the site Camping Prapratno is down a steep winding road & looks a little like Cornwall, we see the beautiful cove with turquoise waters, can’t wait to get in that! We drove around and chose a pitch with a sea view, Dave says he wants to go and empty the grey waste water and the fresh water tank as he has put some cleaning solution in (after water pump repairs) earlier today and he wants to flush it all out and refresh the water tank with clean drinking water. He gets a chair out for me and I sit in the middle of the pitch, 30 minutes pass, where is he? 40 mins? I’m about to take a walk up to the top of the site to see if he’s ok when a French lady walking alongside her large motorhome, her husband is driving, and he looks really unhappy, she stops and points to the pitch I’m sitting on and directs her husband to park there! Erm I’m here, hello! I get her attention, numero quatre? I say and point to myself and the ground, four fingers are raised from our neighbour across the channel and with my slow nod she directs the acquiescing, dutiful husband further along. I had planned to ask Dave to park in a certain way so as the people behind us could still get a sea view, but she saved me the trouble as she parked directly parallel to them, their cups of coffee and their toes a mere 4 feet from the side of their van, no more view for them! nowt as queer as folk as they say. Dave had finally returned after 45 mins, the waste draining was so slow as he was on a massive slope with limited room, he had to chock up Pogo, the fresh water with the chemicals wouldn’t drain either, he had his hands (yes I asked him if he washed them!) in the clean water tanking trying to push it out, then the fresh water pipe was a trickle to refill the tank, came back full of midge bites and he was not very relaxed shall we say, his sullen face even more desperate than the French ladys other half! so it was a quick stride off to the camp bar for a big beer. The views over the bay from there were very nice and the menu was cheap, so I ordered mussels 50kn (€6.77) the Pelješac peninsular is renowned for its red wines, oysters and mussels, well the reputation was undone on the mussel front at this little restaurant as the mussels were not cleaned of their beards! They were attached to the inside of the mussels, little matted beards that I had to pull off and we ordered French fries to go with them, the classic moules and Pommes frites, well, if my French neighbour who had tried to drive over me comes up here for this tea, I might have a little smile on my face. The couple sat opposite could see my expression and the lady gave a look that said ours isn’t good either. Once we had finished dinner, a conversation was struck up with them and I invited them to our table, Freidl and Charles are from Vienna and their English is very good, we chatted for an hour or so, they have a Dethleffs caravan and travel for 4 weeks & then two months at home, on and off all year! Sounds great to us, they were good company and we exchanged emails and Freidl asked for our blog link, sorry if I’ve got your name wrong Freidl if you are reading this! The red wine was good and decent size glasses too, it made up for the bearded mussels.

The next morning the sun is shining at 8am, we’re outside with our cups of tea eager to get on to the beach as it’s the first sandy beach that we’ve come across, we won’t be needing our beach shoes, then I remember it’s the Royal Wedding day & Prince Harry & Meghan Markle are to be married at 12pm UK time, so the beach can wait, we head to Ston.

Ston City walls just before you have to pay

Not all buildings have been restored but there is beauty in it’s current state, who knows what went before?

Ston is surrounded by huge town walls, strongholds and forts, from the lower level of the town and up the side of the hills, the walls are clinging to the sheer faces of the cliffs, it’s amazing. The walls were built in 1333 to defend the Republic of Dubrovnik and the peninsular, originally 7000 metres long and with 3 forts, it looks very impressive from down here in the town, it has a similar look to The Great Wall of China but a smaller scale. They are in very good condition and you can walk around parts for 70kn (€9.47) per person. 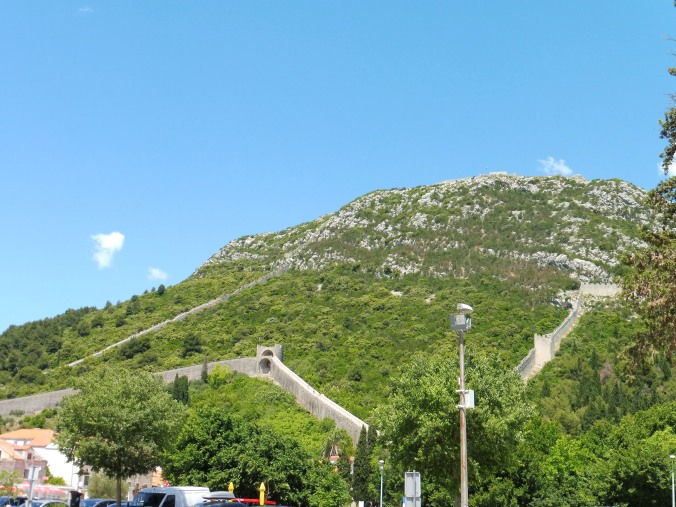 Reception lady informs us that she wouldn’t walk up the winding, steep and very busy road up the hill if she was us, and we can’t get a bus or a taxi to Ston! Oh well, Pogo will have to go out for a day trip. We parked very easily in Ston, there were two large car parks to choose from at 50kn (€6.75) for the whole day, we thought that was reasonable. We spotted a bar with lots of tables outside and canopies, so I went inside to enquire if they might know a place where there would be a TV to watch the wedding in an hour or so, the nice bar man said you can watch it here if you want, oh thanks we say, we’ll come back later, we had a little wander about and had a wine tasting in a little place, the Pelješac wine is renowned and we bought one Rosé and two red, he gave us an extra bottle for free. Dave nips back and stows it away inside Pogo, I go to the bar to secure a front row seat for the Royal Wedding, of course we will likely be the only viewers. I was surprised to see the TV already on the right channel for us even if it was in Croatian, as it happened the barmaid enjoyed it too!  they couldn’t get BBC, but I was just happy to watch it. Dave arrives at the bar and enquiries about a bite to eat that is met with, ‘’well we don’t do food, but you can nip to the bakery over there and bring it here’’, off I go and bring back two ham and cheese pastries, resembling a sausage roll and a chocolate donut and cherry strudel, not the healthiest of lunches and definitely more casual than the nosh up at the wedding in Windsor will be later but we really enjoyed it, and we loved the wedding, what a refreshing change that was, African-American gospel choir, African American Preacher quoting Marther Luther King, brilliant ! who went on a bit and then says “we gotta get y’all married!” I nearly choked on my donut at that! I can imagine the Daily Mail and it’s like tomorrow, what a closet racist paper that is! Much like some of the Monarchy of days gone by, I’m so happy to see Harry happy and I believe that together with Meghan and her strong feminist attitude they will be a force for good I’m sure of it.

watching the wedding in the bar

We were a couple of hours watching the wedding and Dave had a couple of beers, so we sat in Pogo, we’re in a shady spot and it’s cheap to park, we read our books and eventually nodded off, we woke up  2 hours later ! after the alcohol has worn off and Dave’s had lots of water and a sandwich we drive back to the campsite at Prapratno, it’s just a couple of miles in one direction and there’s not much traffic now.

We’ve not watched TV for 8 weeks, so it was decided that tonight we’d watch a DVD using our 12 volt colour TV, we can’t get actual TV as we have no receiver despite having a satellite aerial. We chose “The Blues Brothers”, well its hyped up as far as we are concerned, it didn’t cut the mustard! Sorry to any fans of Mustard…………..

5 thoughts on “Mussels or Muscles!”