Right let’s go and catch the 11am ferry to Hvar from Camping Viter just 5kms away from the ferry port at Drvenik. There’s no booking system, you turn up and get in the queue and take a chance. I’m anxious to leave the site and get there as soon as possible because I know the ferry can only take 32 cars and I want to make sure we get on the 11am one. Paid the site fees, 150kn (€20) it’s cash only here much to the disgruntlement of the previous customer trying to leave and catch a ferry and they only had cards and no cash.

10 minutes later we are driving in to Drvenik to join the ferry queue, handbrake on and I am off to the ticket office that I drove past a minute ago as I wanted to get in the queue first and then buy a ticket. Straightforward enough at the office, asked what we had, and how many metres we are (6m), how many people and do you have a dog! I paid 221kn (€30) and checked that we can fit on the 11am, yes, no problem, the crossing takes 35 minutes. As I sat back in the driver’s seat I notice Cathy is feeling nervous, she really doesn’t like boats and she is being brave once more, takes a sea sickness tablet and hopefully she will find her sea legs once more! Waited patiently in the natural shade of the trees as more vehicles joined the line behind us, I counted 23 vehicles in front of us but it included two 7.5 ton lorries, two vehicles with trailers and a long lorry, I hope we can get on!

I noticed a mounted propeller at the side of us as we waited, curiosity gets the better of me and I see it was caught in a local fisherman’s net a few years ago and it’s from a WW11 American B24 Bomber.

At the quay side in Dvrenik – ferry to Hvar

I hear engines firing up in front as the line creeps forward slowly to the ferry boat ramp, as we crept nearer we had to wait as the ferry staff played Jenga with the different size cars, soon we are directed on & taking it slowly over the ramps and bumps we are squeezed on and stop just 3 inches from the transit van in front.

The crossing was very smooth as we stood up outside on the top deck, Cathy likes to feel fresh air and wouldn’t enjoy sitting downstairs inside, I noticed she was stood very close to a life ring though!

Staying close to that life ring!

It’s a calm sunny day for a crossing and the views once more are stunning as we look around in a 360  circle, we are sailing to Surucaj at the easterly end of Hvar to drive westerly to Hvar town, we chose this rather than a 2-hour ferry from Split costing approx. 700kn (€94)

Arriving at Hvar everybody is in their vehicles and engines running as the ramp drops down and meets the harbour side, then it feels like a free for all as we all nudge forward to a narrow exit! I try to wait a little but get tooted more than once from behind and I see cars behind me changing lanes to get off as quickly as possible. As our turn approaches we are directed off in a fashion, see the video below!

We leave the ferry behind us and make our way on the only road to Hvar town, it’s a 40kmp limit for most of the way and in parts very narrow and very bumpy in parts although it looks like they’ve recently repaired much of it, took 1hr 30 mins to do 45kms!

Rocked up to Camp Jurjevac at Stari Grad, drove through the gate and it looks closed, we lock up and go for a nosey, indeed it’s closed until 16th June no wonder they weren’t answering the phone yesterday, noticing adjacent to the the site the land is used as a free car park for the locals and there are some workmen preparing parts of the site buildings for the season. We walk to the small town and harbour area and think maybe we could stay here for free but decide to go on to Camp Vira nearer to Hvar town.

We saw this red car today; this guy doesn’t need a roof rack to carry a 12 ft metal pole! He ties it underneath with string to the front and rear bumper, a novel idea indeed!

Stop the video on 1min & 4 seconds and try to spot it.

Camp Vira is closed but only for lunch until 4pm, we amble through the site selecting spots and places we would like to stay on, we picked one with a sea view on both sides of our van. The site facilities are closed except the showers, it’s out of season here but it is a quiet place with a gorgeous small bay. We like to explore when we arrive and ended up on a dusty rocky track going down towards the sea after noticing a small wooden sign for a Kobona, a traditional fish restaurant, but after 5 mins we doubted anybody would come down here in a car or scooter. We are going for a walk and there is no intention to buy a meal tonight but there might be a nice view, the track ends at the coast and there is  only the restaurant, there’s no activity and we are admiring the position, the veranda jutting out over the rocks and the beauty of the place when a man appears, do you want a drink? yes of course!

We sit out on the veranda sipping a chilled local white wine as the staff explain how the restaurant works in perfect English; so, it’s fresh fish every day, there is no menu, you choose the fish from that days catch, they weigh it, you agree on a price, they cook and serve it with whatever vegetables they have!

As we continue outside I was convinced I was being attacked by the bitey things again, I had shorts on, mistake! we moved inside. 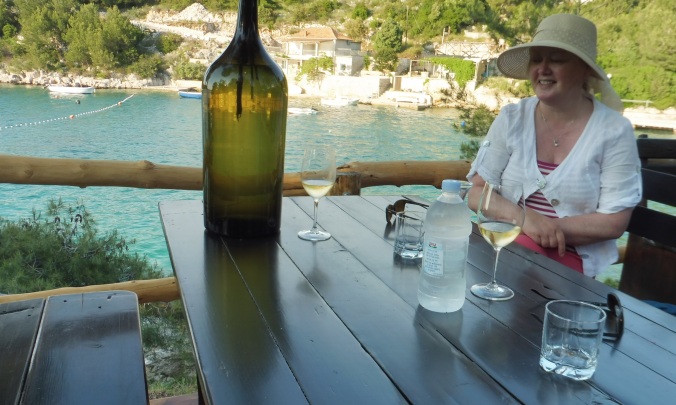 The owner has made this place over the last 12 years himself with his own hands he tells us, it was a fisherman’s cottage, the old nets, corks and crabbing baskets are hanging from the ceiling all tastefully done and he has made all of the tables and chairs too, very rustic.

A couple from Czechia land on the restaurant jetty from a dinghy which they had used from their small yacht, climbing up the steps to be greeted very warmly and loudly by the owner, we found out later they have been coming here for years and it’s one of the best fish restaurants in Croatia. They tell us that 10 years ago, they were sailing nearby, and the winds changed, they dropped anchor here in this small protected bay, they came to the restaurant for a meal, when the bill was presented they only had a card to pay with but it’s a cash only place. The owner said don’t worry you can pay when you return next year! They have been coming here every year since, you’ve got to love the Croatians!

A restless night with bites, creams, maybe the critters are also in the van with us!